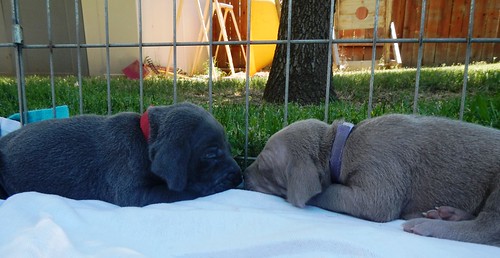 This third week has gone by so fast!  Lots of “firsts” this week!  At the beginning of the week, their eyes were mostly opened and they began seeing the world, or at least fuzzy version of it.  Their ears began to open and now they can hear voices, clapping and all kinds of things.  Now that they can see and hear each other, they are playing together more.  They’ve gotten much more mobile and stable on their feet.  It’s getting harder for Roxie to find a place to lay down in order to nurse them.  They 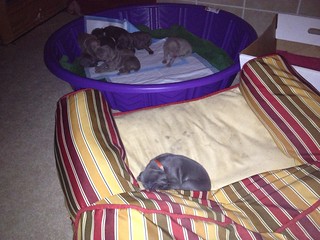 outgrew the kiddy pool when they learned how to crawl out.  I woke up in the middle of the night to find this… orange boy sleeping on Mama’s bed.  I put him back in the pool and woke up a couple hours later to black boy in the same spot.  The following morning two more puppies crawled out and were crawling on the carpet.  That was it, no more sleeping in the kiddy pool.  They now are staying in the whelping box at night.  I was concerned that Roxie would be torn between sleeping near the puppies and sleeping near me.  But, there was no contest.  She sleeps near me and wakes up to feed several times a night and comes back.  She seems to be OK with it. 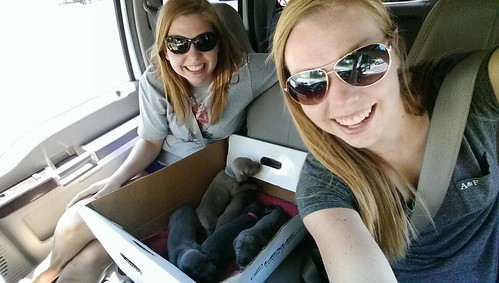 On Wednesday, Sarah & Rachel took the puppies on their first field trip and car ride (other than the trip to the vet on day 2).  They took them in groups to visit their mom’s work and mine.  While at my work, they got to hang out outside on a blanket in the grass while my co-workers came out to visit and snuggle them. 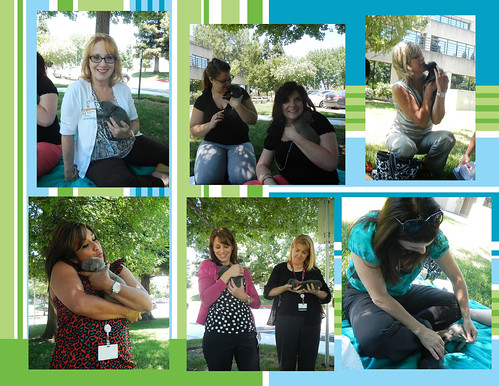 On Friday, the puppies got some extended time on the kitchen floor.  We got to see how they did in a new area on a new surface.  The girls took video of each of them but I haven’t had time to upload it yet and since it’s so long (26 minutes), it’s taking a while to save and upload.  It’s one that you’ll need a cup of coffee to sit down and watch. Check back soon for the video.

On Saturday, the puppies got some extended outside time with Sarah, Rachel and their 9yr old neighbor Tyler. I set up the x-pens and some blankets under the tree and they got to enjoy the beautiful day.  I’m not quite ready for them to hang out on the grass yet.  Also on Saturday, I split the whelping box into two sides to begin the potty training process.  One side is the pee pads and the other is their clean bed.  At least, that’s the idea.  Generally, they do pretty good but once there’s an accident on the “bed” side, then it’s a free-for-all.  So we try to keep the bed clean while still leaving some scent on the pee pads for them. 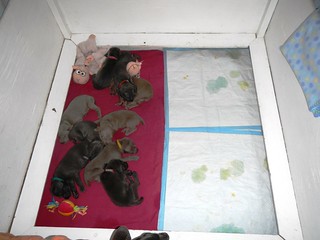 Well, that’s about it for last week.  Fun things to look forward to next week:  eating real food, explore the grass, intro to the swimming pool, intro to birds?