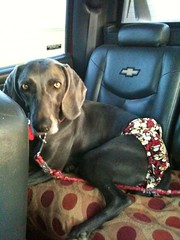 Settling in for the ride

Mom and I got a semi early start this morning at 9:30.  It took Roxie a while to settle down as she has not been able to exercise for over a week and she has energy overload. 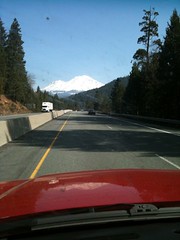 It’s been a really long time since I have driven much further north than Shasta Lake.  I have forgotten how beautiful Northern Northern California is with Mt. Shasta dead ahead.  I just couldn’t help snapping a few camera phone pictures as it came into view.  The scenery makes the long drive worth it.

We made sure to make us

e of the rest stops along the way to give us all a chance to stretch out and go potty.  We made an extra special stop just north of Salem, OR to visit with a friend who moved up there a few years ago.  She, along with hubby and baby met us at a Starbucks next to the freeway were we got a chance to visit for a few minutes before getting back on the road.  We arrived at our destination at about 6: 30 and at that point, it was time to meet Roxie’s Mr. Right.   Wondering who Mr. Right is?  Well, as soon as Liz posts his info, then I know it is ok for me to post his info so until then, you just have to settle on a photo. 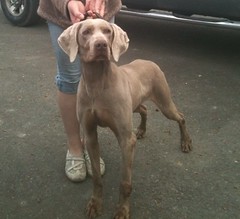 When they finally met in person, Roxie was so happy to see another dog, 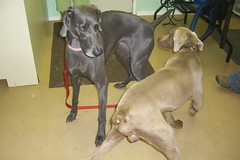 she just wanted to play.  Mr. Right, however had something else in mind.  They “tangoed” a little bit and danced around each other then it was time, although Roxie still didn’t know what to do so we had to hold her still.  By “we” I mean the breeder.  I was busy taking pictures and video.  After a few minutes, everyone got the hang of what they were supposed to be doing and it was over before I knew it.  Although it didn’t go as it should have.  Apparently there’s supposed to be some “cuddling” time aftewards were they’re supposed to just hang out while still “tied” together.  Well, typical male, he figured he was done and moved on.  Sheesh, give the girl some cuddles after you de-flower her will ya???

Ok, I’ll give the guy a break, it has been a couple years since he “got any”.  But, he’ll have another chance to redeem himself tomorrow (Sunday).  For tonight, we are all tired from a long drive and ready for bed… that is after I finish downloading pictures/video then uploading them then blogging.
Well, that’s all for tonight.  Until tomorrow…
P. S. Yes, I took video of the breeding but am not posting it because, well, who really wants to see doggie porn?  If you REALLY want to see it, email me directly and perhaps I’ll send you the link.
Like this post? Share it