This has been a BUSY week!  So much has happened this week! so lets get it started:

Sunday – the puppies got their first introduction to the swimming pool.  They did really well and were interested in the water.  They would stick their noses in the water as if to smell it but all that happened was they’d get water up their noses and sneeze.  It was so cute!!  Several of them climbed out and I would put them back in. I wanted them to at least spend a few minutes in the water.

Monday –  The puppies got to spend some extended time outside in the grass.  I’ve started 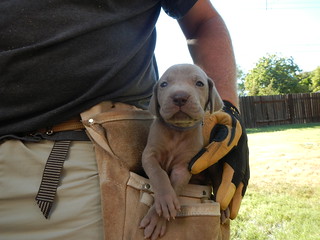 them on “follow me” and whenever outside.  They were also exposed to some construction noises in the backyard.  My pergola is being finished which requires, drills, saws, pounding.  They all did really well and the noise didn’t seem to bother them at all.  They should have not problem with gunfire!  They also got some more pool time.  At this point, pool time and outside time becomes a daily thing.

Tuesday – It was a nice day in Northern California so the puppies got to hang out outside under the tree all day along with some more pool time.  Every day, the water gets just a little bit deeper.  Tuesday was also the day they got to eat their first non-mama meal of baby food and goats milk.  Each puppy was placed on the kitchen table and was encouraged to lick the spoon. It didn’t take much encouragement at all!  They LOVED it!  As they were chowing down on the spoon, I started to notice some clanging against the spoon… TEETH are starting to come in!  Once they finished their meal, I offered them up to Roxie to clean them up.  She was happy to oblige!

Wednesday was similar to the other days but this time, I took the day off work to be home with them.  They got more pool time and outside time but this time, before bringing them in for the night, they were fed outside with all the noise going on.  This helps them associate good things with loud noises.  The puppies also graduated from the whelping box to a play pen and litter box.  The kiddy pool that they’ve been playing in has been converted to a litter box that includes pine shavings for them to potty in.  The play pen includes a large crate for them to sleep in which aids in crate training, litter box, baby play mat with hanging toys, rope toys, stuffies to chew on, a pad to sleep outside the crate, water, and an upside down cookie sheet that makes noise when they walk wrapped with a 24″ xpen.  All of this fun stuff gets taken away at night and the litter box gets pushed up directly against the crate and the xpen tightly wrapped around so that the only place they can go is the crate or litter box.  This aids in the potty training process where they don’t want to potty where they sleep so their only option is the litter box.  Every morning (or whenever I need to clean) they are put in the crate with the door closed so I can have access to the whole area to sweep (which never really ends because those pine shavings track EVERYWHERE) and mop and change out the water, towels and wash the play mat.  They are doing great with the potty training but there are still accidents.  My mornings have become an hour longer. 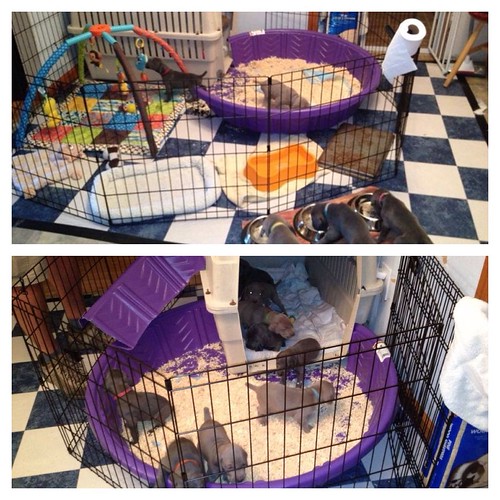 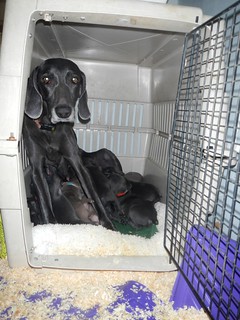 Now that the whelping box is gone and the xpen is keeping the puppies in, it also keeps Roxie OUT.  She has the ability to jump the xpen, but she won’t jump IN.  This means that in order for Roxie to nurse, she has to be let in the play pen.  Now that they have TEETH, she doesn’t want to nurse very much anymore.  When she wants in, she will stand in front of the crate and just stare at me.  When I let her in, she goes into the crate and tries to lay down but its getting harder so she mostly sits and lets them at her.  This doesn’t last long and when she’s done, she’s happy to jump OUT of the play pen.

It’s so nice to be home on the weekend.  I get to spend time with them, and catch up on my paperwork, photos and videos.  This weekend I filled the pool up to their bellies then up a little more.  When I put them in the pool tonight, they were pretty much swimming!  Some of the bigger puppies could touch the bottom with their tippy toes and kind of hop through the water, but the others were swimming!  The water wasn’t too cold (for me) but it was a little chilly for them as most of them would climb up on Mount Renee to get out, but others didn’t have a problem at all.  I think tomorrow, the water needs to be a bit warmer and they will be happier.

So tonight, I tried to introduce the puppies to the steps that lead from the house to the back patio where they will eventually be spending a lot of their time.  Only one puppy (orange boy) was brave enough to take the steps.  A few others came to investigate but didn’t want to try it. Eventually, I picked them up and took them through the motions of coming down the steps.  This week, they’ll learn the steps and will begin running out the door to go potty in the grass.  Below is video of Orange tumbling down.  I have a rug at the bottom to soften the landing :).

Finally, as I was getting ready to feed them dinner of soften puppy kibble, canned dog food and goats milk, I dropped the bowl on the ground.  At first I was thinking that I’d let Roxie have it but then decided to not let it go to waste and brought the puppies in to let them have a “free for all” dinner. WHO NEEDS A MOP WHEN YOU HAVE WEIM PUPPIES! Once they had adequately cleaned up, I let Roxie come in to finish up. My term for her is “CLEAN UP ON AISLE 9!!” (get it, there are 9 puppies).  They soon lost interest on the food on the floor and started chasing Roxie around to try to nurse her. As you can see below, she wasn’t all that interested in that idea.

See, I told you it was a busy week!  Coming next week, learning the steps to the patio, more pool and outside time, swimming lessons in the big people pool.  I’m trying to schedule bird intro with the trainer