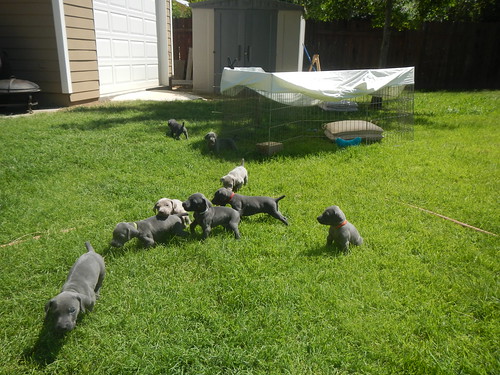 OMG, has it been a week already?  And a week since my last post?  MAN!  I am falling down on the job!  I may not be posting new blog entries but I have been adding photos and videos so I hope you’ve been checking the video gallery and 2012 Puppies pics or checking things out on Facebook. 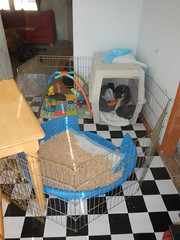 So what did we do this week?  Well they have moved from the office whelping box to the kitchen play pen inclusive of a large plastic crate for them to sleep in, a Kiddie pool filled with pine shavings (litter box), and lots of play toys.  Everyday, the puppies get outside time in their outside playpen (see above) and I try to get them in the pool every day and each day increase the water level a little bit.  They 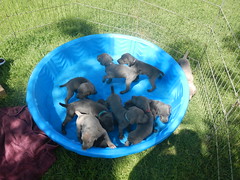 still climb out of the pool but no one is crying or whining about it.  I have another breeder friend who has offered to help me teach them to swim in his pool.  I’m hoping to do that next week.  I’ve been working on their “follow me” behavior and bring them all out of the xpen and call them to me.  Some follow, others wander off and explore the yard, patio or look for their Mama and try to nurse her.  It’s hard to note who is doing what so I’m replying on photos and video so be sure to check those out.  Tonight, however I took them out one at a time for their 4 week old pics (photos posted) and let them out in the yard.  All of them followed me very well. There were a few that would follow me, then venture off in their own direction (or to find their Mama).  I gave them lots of praises for coming to me when I called them and have made a rule… Four on the Floor and you get attention… even better, Butt on the Floor and you get attention.  At this point, they know that I provide food and love so when they are close to me, they rear up on my calves with their sharp toe nails.  I do not want to encourage this behavior so I push them off and then give them attention when the have FOUR ON THE FLOOR.  Hoepfully this early lesson will be a good starting point for when it’s time for them to go home.

They are all playing with their toys, batting at the dangling play mat toys, chewing their stuffies and sometimes carrying them around.  They aren’t quite chewing on the teeting rings yet, but I think that will come soon as a couple of the boys are chewing TOO HARD on their siblings and not paying attenion to their cries.  Some of the puppies play alone with toys, others prefer to play with each other.  Check out this video of Covey playing alone on the play mat.  It was too cute not to record”

After the week 4 weigh in the results are in!  The top spot has been taken over by Covey weighing in at 4 lbs 13 oz followed by blue boy at 4 lbs 12 oz.  Orange boy is still the smallest at 4 lbs 3 oz. Weim Ways says they should be one pound more than they are in weeks so I guess that means I need to up their food intake.  They have successfully moved from Mama’s milk to real dog food.  They went from human baby food and goats milk to baby food, goats milk and canned food, to canned food, to finally puppy kibble soaked in water.  They are good little eaters and scarf down their food as soon as it’s put in front of them.  I feed them three at 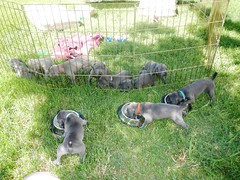 a time and either outside or in the kitchen.  They still get Mama’s milk occasionally but with those sharp teeth and claws, she doesn’t want to nurse for more than five minutes at a time.  In the mornings when it’s time to clean their kitchen area, I put them back in their whelping box in the office so that Mama can comfortably nurse them… as opposed to in the plastic crate that gets a bit crowded. 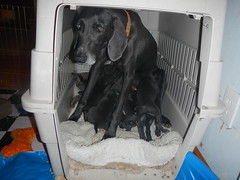 Coming this week, they will hopefully get an official swiming lesson and an intro to live birds.  These were things on the list for last week but unfortunately, it’s hard to arrange these things when it’s just me.  Wrangling puppies, taking notes, photos and video… I need more hands.  UPDATE: Intro to live birds scheduled for Sunday, May 27th at 9:00 am at my house.  Spectators welcome.

Well, that’s all for now.

P.S. If you’re wondering why there is a sheet over their outside play pen… there are hawks circling looking for dinner.