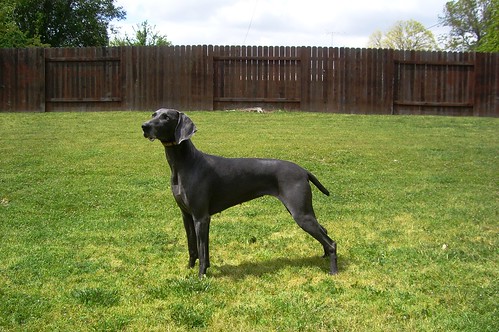 Well, we are now 21 days in and still not much change in Roxie’s physical appearance. It seems that her teats might be starting to get a little bigger, but Liz thinks I’m imagining things. As far as her behavior goes, she’s having a few behavioral changes. Over the last couple of days, she has changed some “normal things”. She usually sleeps in her bed next to mine every night. Over the last couple of nights, she has bounced back and forth between her bed next to me and the couch. One night, she stayed out there all night! It was lonely having her in another room. Another behavioral change is that she has decided that she no longer wants to stay in the laundry room. For all of her three years, she has been confined to a small area with access to the doggie door while I’m gone. The rest of the house is blocked off b by a 36″ high baby gate wedged between the washer and the wall. She has always respected the baby gates (there’s a 24″ one blocking off the office as well). She has never tried to escape. Well, that is until today.  SOMEBODY (Bella) taught her that if she sticks her nose in between the slats, that she can move the gate over and get out. Now, Bella has been gone for over a week but apparently Roxie remembers exactly how Bella was able to escape and did it within seconds of putting her away. UGH! I don’t want her loose in the house while I’m gone! She gets into things. So, I created a block to keep the gate from sliding down. So far so good. So, are these little behaviorial things hormones? Or my headstrong puppy testing me? Who knows? I guess this is part of the journey to motherhood. Right now, my Angel is snuggled up next to me as I type. 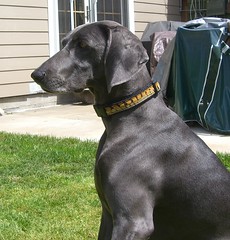 Here is a picture of Roxie sporting her “Pheasant” collar from Cooper’s Collars.  All of the collars made are from used clothing purchased from the local animal shelter thrift store.  Heather, the owner has amazing imagination when it comes to seeing crazy patterns on a dress and turning it into an awesome collar!
Well, that’s all for this week.  Let’s hope that we see some changes by next week!
Like this post? Share it