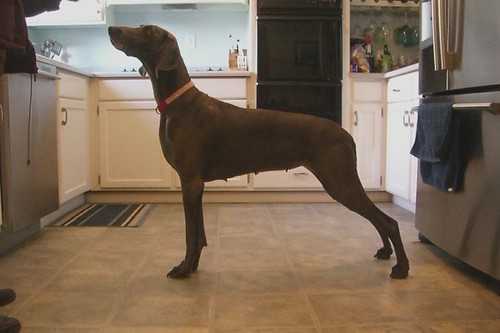 Yep, that’s a baby bump you see!!!  Her tuck  is slowly disappearing and she is growing everyday!  And it’s only been within the last few days, wow that was fast!  There are definitely babies in there!  She has finally regained her appetite and is anxious to eat again so we will begin adding more food to her daily regimen.  She is super lazy around the house and always is just inches away from me with her head on my lap, which isn’t all that different than before.   I just love her so much. 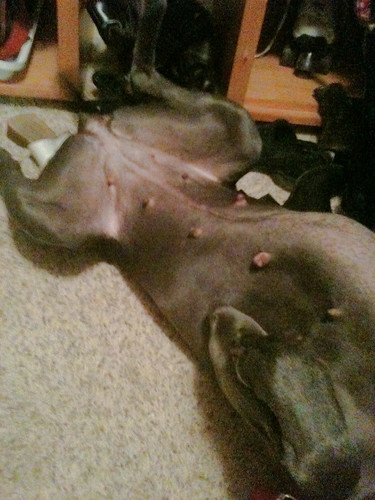 It’s raining again today so the kitchen photo is the best I have.  It cleared briefly and we ran outside to take pictures but she wouldn’t stack right so I didn’t want to use those pics.  I also got a belly shot this morning.  You can’t really tell that it’s bigger, but it is.  Actually, I swear it got bigger in the last 8 hours.

Even though she isn’t due for another month, I am still making plans for the week before and of delivery.  I will be scheduling an xray for Tuesday, May 18th.  This xray will show how many babies are in there so that we know how many to expect and make sure we don’t miss any that might be left.  Roxie will then go to Liz’s house for about a week to get acquainted with Liz’s house, the other dogs and general surroundings.

The following week, I will be “on call” and as soon as I get the call from Liz, I will be on my way to help whelp the puppies!  I won’t be able to blog while I’m there, well, maybe I can but more than likely, I will be facebooking all of the updates, pictures and video.

So… I’m thinking about having a “Puppy Shower” :).  I know, I’m a total geek, but I’ve seen some really cute puppy nurseries and I would like Roxie to have one too.  I’ve asked Liz if she needs anything and she is getting back to me.   In the meantime, I might be browsing the baby registries for a cute little theme for the puppies.

Speaking of themes, typically the breeder chooses a  theme for the litter name.  I’m hoping that Liz will let me chose the theme, or at least help choose one. So, do you have any suggestions?  For example, Roxie’s litter the theme was “Sky”  All of Roxie’s littermates had “Sky” in their registered name.  Roxie’s registered name is “Fairhaven’s BlueSky’s the Limit”.  The 2008 litter’s theme was the song lyrics from Somewhere over the rainbow.  Which is fitting since their mother was Rayn and their father was Bo.   Bo’s breeder, Debbie, themes all of her litters A-Z with musicians.  I think the last litter was the Tina Turner Litter.

This litter we have Roxie and Duke as the father.  So there could be lots of possible themes.  I even thought about John Wayne movies!  Or perhaps something that has taken over my life lately… jewelry.  Names having to do with jewels.  So, think about it and let me know what you think!  Leave a comment if you have an idea or like one of the ideas I meantioned.  Oh, and typcially the blue puppies have the word “blue” in them.

Ok, I think I have jabbered on enough tonight.  Be sure to click on any of the photos to visit the Flickr album so you can compare each week’s photos.  There is an amazing difference between last week and this week.

Have a great night!  Until next week,