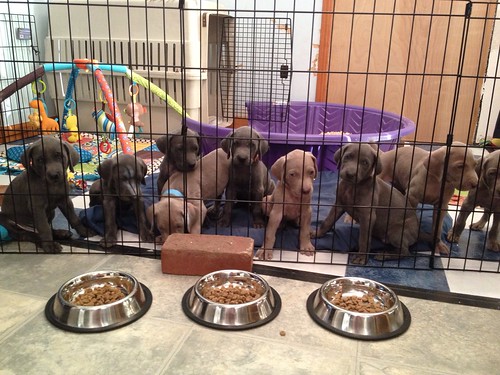 Time has gotten away from me!  They are almost 6 weeks old and so much has happened in the last 2 weeks!

The week of 7/22-7/28 the puppies had continual exposure to the great outdoors as well as daily swimming lessons in the kiddie pool. They are also getting more and more regular food and are almost fully weaned… If Roxie would stop trying to nurse them!  I began cutting her food back and restricting her access to the puppies to assist in drying her up.

While the puppies were doing really well, Mama Roxie came down with a case of mastitis in one of her teats.  This is a bacterial infection where the teat grows very large, hard and hot to the touch.  She had a fever and was just miserable and sore.  I took her to the emergency vet to have her evaluated and came home with some antibiotics.  After several days of antibiotics, manually milking the infected boobie, and hot packs she began to feel better and the infected boobie started healing. 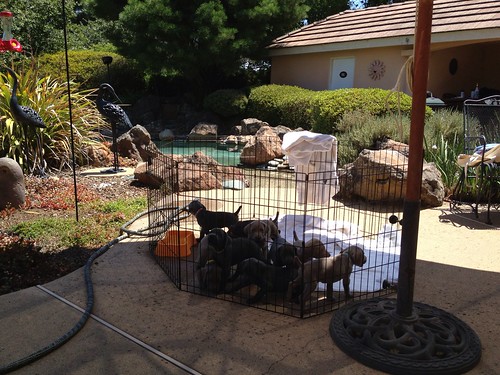 At the end of the week, we took the puppies to a friends house to give them swim lessons in the big kid pool.  Armed with hot dogs, we hopped in the pool and let each one swim around.  Most headed straight for the edges to get out but we brought them back to get them some more practice before allowing them to swim to shore.  Some did better than others, but in general they all did well.  They continue to have daily swims at home in the kiddie pool, but now that they are bigger, they can crawl out so they have to be watched.  Below is video of each puppy’s lesson.  Warning: the video is 32 minutes long.

While we were at swim lessons, we brought one of the puppies inside to introduce her to the family kitty. It was a complete non-issue.  I was missing my own kitty, Cheeto who passed away a few months ago.  He was such a good puppy teacher. Below is teal girl and Shadow the orange kitty.

On Tuesday 7/29 the opened outside play area was opened to the puppies.  As they started getting 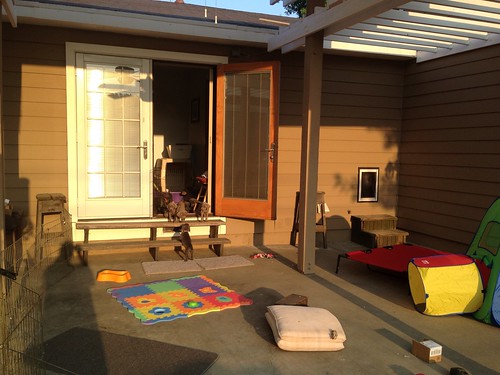 more confident coming down the stairs, the xpen inside the kitchen was opened up so they puppies could wake up and immediately go outside to potty.  It didn’t take very long for them to get the idea and rush the xpen to hurry outside! 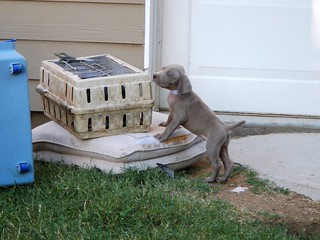 Wednesday 7/31 was the day to introduce the puppies to birds.  One of Roxie’s trainers, Pierre Urrutia came down from Chico with some birds to let them play.  I had barely enough time to get the camera rolling when the first bird (a small pigeon) was introduced.  Black boy immediately picked it up and ran with it.  I continued rolling through the first 20 minutes so I didn’t get any photos.  Below is video of the entire bird intro.  Warning: it’s almost 27 minutes long so get comfortable and enjoy!

On Wednesday, we introduced them to the doggy door (without flaps) and by the end of the night, 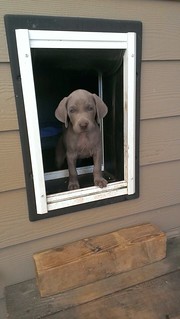 they were coming and going easily.  Like the steps off the kitchen, they got so comfortable, they began rushing the xpen and rushing out the doggy door to got outside to potty. 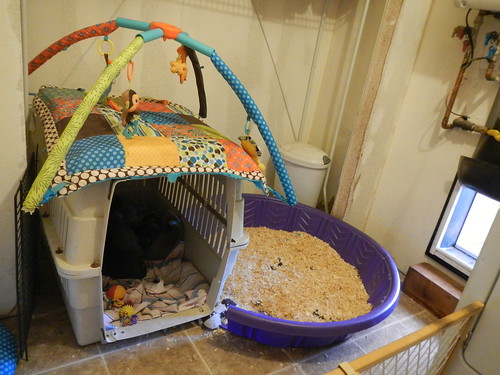 On Friday, I moved their crate and litter box into the laundry room with access to the doggy door and to the outside play area.  They are now able to come and go as they please and at this point (Sunday 8/4) they are mostly pottying outside in the grass and not in the litter box.  They spend most of the day outside playing and come inside when it gets to warm to nap.  Roxie continues to let them nurse but has finally started laying down the law and snaps at them when she’s done.  She has started mouthing them to teach them when to stay off of her and when they are moving in a direction she doesn’t approve of.  It’s amazing how they obey her.  Us humans should take a lesson in this matter of training as it really works! 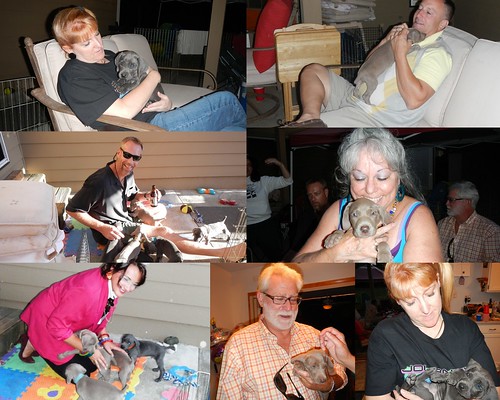 On Saturday, 8/3 the puppies had a great socialization opportunity as I had a big party on my patio.  I moved their play area closer to the wall so they could still come and go inside as they wanted but there was plenty of room on the patio for the party.  The guests had a lot of fun snuggling and playing with them all the while there was music and lots of commotion.  They fared very well mainly staying outside and napping or “suffering” through the snuggles.  There was no barking or whining in fact if you weren’t drawn to their cuteness, you would never know they were there!

That’s pretty much a wrap of the last two weeks.  Sorry for the delay!  However, you can always catch the quick news and updates on Facebook.

Coming this week:  litter evaluations, vet visit, lots of play time, more swimming.  I will also be working to schedule another bird intro.