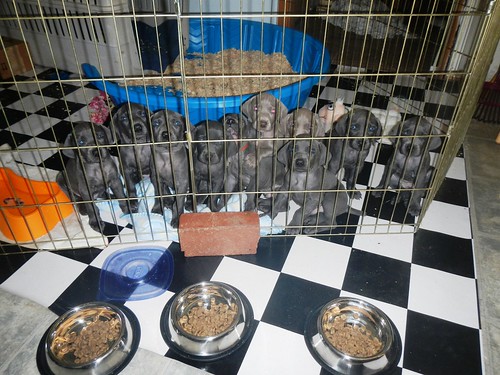 Lots of things went on this last week first up was the puppies’ first introduction to birds.  In case you missed it, you can read all about it, see pics and videos on my blog post HERE.  Later in the week, I had another opportunity to put the puppies on birds.  You can watch that video below. It’s about 11 minutes long.  So far, I’m very happy with their interest level.  They are increasingly becoming more and more interested and are beginning to use their noses to find the bird as it is placed several feet away.  They will have another opportunity tomorrow (Sunday) morning.  I am also working on their noses to search and find their meals.

Speaking of meals, I am also working toward creating calm, submissive and patient puppies. As you can see from the photo on the top of the post, they are all patiently awaiting their turn to have their dinner. I only feed three at a time so I choose only the puppies who are calmly sitting to eat next.  I use this same practice with Roxie although more advanced.  She is placed in a sit and can only eat when released with an OK.  I can walk away from her, turn my back and she will still be waiting.  I beleive that this type of training, which is done at least twice a day everyday is a constant reminder of who the pack leader is and that I am in charge.  With the puppies, it’s a little early to expect them to stay in a sit command but I do expect them to sit until they are chosen to eat.

The puppies learned to come out of the house, and down the two steps all by themselves.  They get better every day.  Here is video of them coming down the steps:

Thanks to Chris, Jimmy and Brad my patio pergola is finished and I am now able to set up the patio play area for the puppies with an area of grass for them as well.  They now have shade and lots of  fun things to do.  I even have their pool in there in case they want to take a dip.  They love it out there and I think they would spend all day playing but the last few days in Sacramento have been 95+ degrees which is just too hot for them.   They tend to come inside to sleep.  As of today (Saturday) they are learning to go in/out the doggy door although the flaps are open until they are comfortable coming in and out by 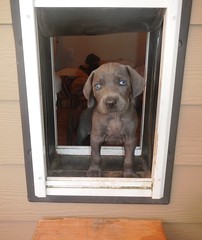 themselves.  So far, they come and go as they please while I’m home and able to listen for them.  If I leave, I will bring them inside.

Not only did they get to start using the doggy door today, but they also got their first swimming lesson.  Special thanks to my dear friend Tracy and her parents Jim & Lynda for letting me use their pool.  With Tracy helping me, the puppies did great!  *NOTE, I FORGOT MY CAMERA! so the first video was taken by Tracy’s dad and was only part of the first group* The sun had already gone down behind the house creating shade on the pool area and it was about 85 degrees outside and the water temp was about 75.  Upon first entering, the first four (lime, Covey, green and black) started out strong and looked like they would swim to China if we let them go, but having too many at a time made it impossible to let any go.  So we held on to three and focused on one.  While waiting, the three got cold so when it was their turn, they were no longer in the mood to swim as striongly as they might have.  The video below shows most of the puppies including the first four but not the one-on-one time of three of them.  I hadn’t remembered that I had my iphone so video of the next two (teal and blue) wasn’t taken.  Teal was especially strong.  We did, however get the final four (yellow, orange, red and hot pink).  Overall, they all did pretty well and given a couple more times in the pool with some more hot dog rewards, they should continue to progress into great swimmers! 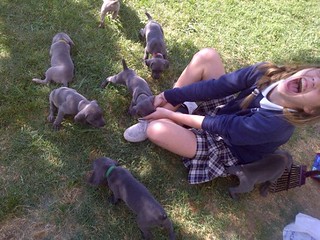 The puppies had lots of visitors big and really small this week. They got to meet a 9 mo old and 3yr old this week and they did great.  The photo to the right is of Melissa, a friend’s daughter whose photo shows the epitome of the joy that puppies bring to your life…. although technically, that one was biting her finger.  SHARP teeth! 🙂  With all the construction going on last week, the puppies were also exposed to loud noises like the nail gun, saws, air comperssors and hammering. This should go a long way to help them be OK with gunshots.

This last week, their personalities are really starting to show.  There are a couple who are definitely more dominant over the others (bullies) and will pick on their siblings, biting and crawling over them.  These also tend to be my most vocal puppies.  When I hear whining, it’s usually one of these three.  These puppies would be best suited for homes that are experienced Weim owners that understand the breed and can handle hard headed, dominant personalities.  These puppies tend to be like their mother in this regard.  Then on the opposite end of the spectrum, there are those that are the quiet ones. The ones that will lay with you easily and are often off snoozing on their own.  Overall, they all are very sweet and loving.

Coming up this next week… Sunday, another bird day; Tuesday, Volhard Puppy Aptitude testing; Friday vet visit and conformation evaluation.  I start full time work on Monday so I won’t have much day time to work with them so they’ll get as much as my evenings as I can give them.  Thanks in advance to neighbor Nicole for stopping by 2x daily to check on them while I’m at work!

That’s all for tonight.  I must sleep.  Have a great rest of the weekend and be sure to watch for more videos and pictures!