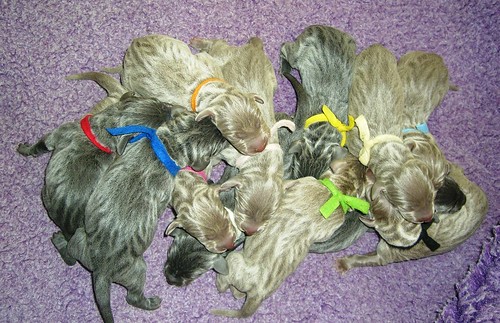 The aliens have arrived!  All this time, Roxie has been wondering what on earth has been going on inside of her and now she knows!  12 little Weimaraner puppies arrived on Saturday, May 22, 2010 from 12:35 pm through 3:15 am on Sunday, May 23rd.  Here’s the final tally:

So here’s how the weekend started out…

As you all know, I had anticipated the arrival of the puppies on Wednesday May 26th based on 65 days starting from the third breeding.  But last week I was corrected that it is 63 days from the first breeding, which meant they were due this weekend.  I was praying they would hold out until Sunday afternoon as I had a busy weekend planned. I had 3 jewelry parties planned for this weekend which looked to be great parties.  Friday night started with Carrie’s party that was going well.  At about 8:00 Friday night, Liz called and said that Roxie’s temp had dropped which meant she was starting Stage 1 so she would be delivering within 24 hours. I was totally bummed because I can’t cancel my parties so it looked like I was going to miss the delivery.  About 20 minutes later, my hostess for Saturday’s party called and said her attendance had dropped to only one person and asked if I wanted to still have the party.  I would never cancel a party, but if SHE wanted to cancel, I wouldn’t be heartbroken.  So we decided to postpone for another time.  The God’s are looking out for me because that meant I can be there on Saturday.

So all night long, I was tossing and turning wondering if I would hear the phone if Liz called, if Liz would call if she progressed in the middle of the night. Finally morning came and I waited until at least 8:00 to call.  She said she wasn’t progressing much but that she would expect something within later in the afternoon/evening.  I decided to go ahead and head up there so I can spend some time with her before hand.  So I hopped in the shower and off I went. 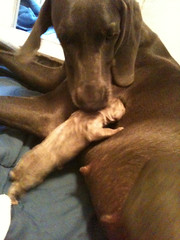 Just as I was getting on the road, Liz calls and said her temp went up again so it may not be until Sunday after all.  Shoot.  My Saturday was clear but I still had a party on Sunday.  Sunday doesn’t work for me darnit!  I decided to keep going and if nothing happened, that was ok. At least I got to spend some time with her.  I arrived shortly after noon and Roxie was happy to see me and I was happy to see her.  She was shivering a bit which is a sign of labor but no other real signs.  She would lay down for a minute then get up and follow us and lay down.  Liz gave me the run down of the whelping area and what this was for and that was for.  I noticed while Liz was talking that the other dogs were hanging around but no Roxie.  She must be going potty.  After a few minutes, I was getting ready to go look for her and as I was heading towards the back door, she came in the doggy door.  She was carrying something and I thought to myself, “hey, she found a rope toy and wants to play”… then as she got closer both Liz and I realized, it WASN’T A ROPE TOY!  It was a puppy!!!  Holy crap, she had a puppy outside!!   AND… she brought it in to us!!!  Without chomping it like she would a bird!!!  Liz and I were both totally shocked at what we were seeing and we grabbed it from her and started drying it off and making sure it was ok.  The first born was a gray boy and he was OK!

As we were working on the new baby, we both just kept talking about how amazed we were that she was showing no signs of hard labor and how surprised we were.  We guessed that Roxie went outside to potty and she squatted and her water broke and the baby was right in the birth canal and came out with the water.  Talk about thowing the baby out with the [bath] water!   Roxie was probably thinking; “hey, was it is that that just came out of me?  I better take it to Mom in case it’s important.”   What a good girl!!!

We immediately headed to the whelping box and I worked on getting the puppy to suckle (and taking pictures and updating Facebook, and calling Tate).  It was a really busy time for me!  About an hour later, the next puppy came and Roxie really labored for this one.  Turns out the first blue boy was giant and didn’t want to come out.  Liz worked him out and he was a hefty boy of over 19 oz!

By 3:3o, we already had 4 puppies and by the time Tate arrived at almost 5:00, two more had arrived.  Little did we 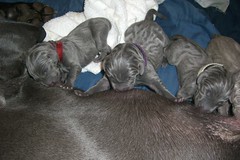 know, we were only half way through!  By 8:00 we were all exhausted, from kneeling down over the whelping box (Liz), standing above it (Tate), or sitting down in it straddling Roxie and managing nursing puppies (me).  We had 10 by that time and we knew there was at least one more to go.  Roxie had been quiet with no contractions so we broke for dinner.  Then we headed back in and took Roxie out for a walk to try to get things going.  When that didn’t work, Liz tried a technique similar to you human mothers know as “stripping” (if you don’t know, you don’t want me to explain).  That seemed to get things going but it was still another two hours before #11 arrived. 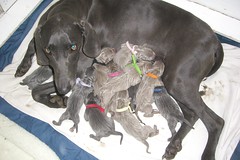 We felt around to see if there was one more and I thought I felt one, but by the time anyone else came over to feel, Roxie had flipped sides and they couldn’t feel anything.  So, we cleaned up a bit, and put all the puppies in with Roxie and prepared for bed.  We pulled a mattress in front of the whelping box and I slept there to be sure that things went ok through the night.  The puppies were anxious and whined most of the night.  Whenever one started sceaming, I would get up and find one had gotten stuck under the pig rail or behind Roxie.  At one point, I heard Roxie moving around and got up to check on her and she was changing positions so I helped her move the puppies so she didn’t lay on them.  She was doing good on her own, but I wanted to be sure.  I noticed some stuff coming out of her but I thought it was just residual so I went back to bed.  I kept hearing Roxie cleaning the puppies which was keeping me awake because as she was cleaning, she was disturbing them and they were making noises.  A while later (3:15 am) she was STILL cleaning so I looked in to see and found she wasn’t cleaning puppies she was cleaning her area and there was somehting back there… HOLY CRAP another puppy!   I grabbed up the puppy as I called for Liz and started cleaning and rubbing praying that it was still alive.  Turns out, he was born and Roxie had done an amazgin job of cleaning him up and clearning his nose and mouth of mucus all the while not squishing any of the 11 puppies under her.  Puppy #12 was healthy and strong.  We put him in with the others and he did great. 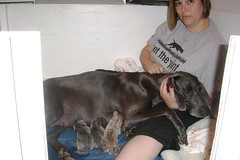 Holding my baby while she nurses her babies

I didn’t sleep much that night but the experience was well worth it.  I am so glad that the stars aligned and I was able to be there for Roxie and help calm her and literally hold her during her labor and delivery.  I was in charge of ensuring the puppies were nursing.  Whenever it looked like a new pup was arriving, I would whoosh the puppies out of the way while Liz swooped in to catch and clean.  I would hold onto the puppies as Roxie was delivering and then would give them back when she was ready.  Liz was amazed at how trusting Roxie was to allow me to take the pups from her.  As the litter grew larger, we only allowed 5 pups at a time to nurse while the others were outside the whelping box snuggling and snoozing.  At some point, I wondered if Roxie thought there were only five puppies.  But she knew they were out there as she would poke her nose out once in a while to check on them but at some.  Roxie would often times, come and try to lay on my lap and if she would fit she would have been. 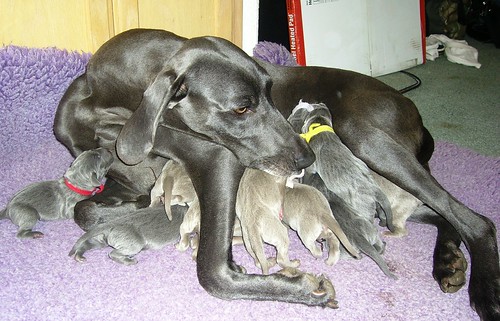 I am amazed on how good of a mother she is, especially for her first litter.  She was always gentle when walking or moving around them, laid quietly while they nursed and gave extra room for them to reach the teats under her arm and back legs.  She licked them and cleaned them as they came out.  Sunday morning as we were clearing out the whelping box with fresh linens, we moved the puppies out onto another pad the were whining and wiggleing around trying to huddle up.  I was sitting next to them trying to give them something to snuggle against when Roxie came over and pushed me out of the way so she could lay down with them. There was so much urgency in the action that it was almost as if she was saying, “Mom, get out my way they need me!!”  She pushed me away, and scooted herself under them so they could find her and begin  to nurse.  That was when I was able to snap this photo of her with all 12 of her babies.

I’ll be heading back later this week for the  tail docking and dew claw removal.  I hope to get over there at least once a week to see the babies grow and spend time with Roxie.  Upcoming events to look forward to, personality testing, conformation evaluation, field evaluation, and finally seeing who Liz will select for new homes.  If YOU are interested in creating a home for one of these puppies, please contact Liz at liz @ fairhavens.com

I want to thank all of my Facebook friends for your well wishes and comments throughout the process.  It has been an exciting time and your excitement means a lot to me.  To see a collection of the photos taken see the photo slideshow below. Tate got some really great shots so be sure to check them out.