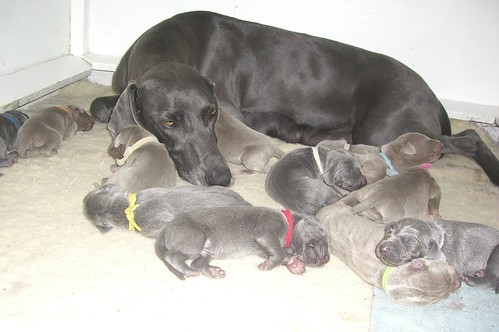 I took the day off and went to Liz’s for the puppies appointment to have their tails docked and dew claws removed.  I also drove the RV up so that for the next 5 weeks, Tate or I can stay the night and not have to make day trips.  Tate was coming up seperately so he could take me home from driving the RV.  I arrived a little after noon and was able to spend some time with Roxie and the puppies before our appointment.  Liz and I weighed the puppies and they are all gaining weight nicely, albeit some a little more than others.  Liz will have to start rotating some of the pups to ensure the piggies don’t hog all the food.

We headed to the vet and Tate was supposed to meet us there.  The vet was very efficient and very FAST!  Tate still hadn’t arrived and the vet was already over half way done!  Tate arrived in time for the last half of the puppies and was helpful in keeping track of who, what, when and where.  The pups did really well and were fast asleep within a minute of their turn.  We headed back to Liz’s where we spent the rest of the day playing with the babies,  taking pictures and video and oh, watching the American Idol Finale (America got it wrong) after which we headed home.

I probably won’t be able to head back up to see the puppies until June 6th.  By then, their eyes should be starting to open.  Here are before/after photos of Roxie.  She’s looking pretty good! 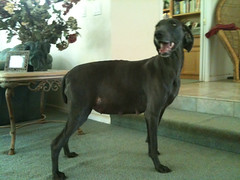 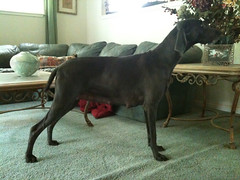 I’ve separated the photos into albums so you can see new photos without having to sort through all the old ones.  You can view all of the albums here: http://www.flickr.com/photos/reneeviehmann/collections/72157623997266547/