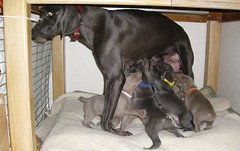 After two weeks, I finally got to go see Roxie and the puppies again this weekend.  The puppies have grown so much!  They are playing with each other and crawling all over the place!  Liz has moved  them from the master bathroom to the dining room with their “den” under the dining table in the corner, where they hang out and nap.  They come out to drink some water and go potty.  They are just eating, pooping & peeing machines!   Roxie has to be let in to feed and when she goes in, the MOB her not even giving her a chance to lay down before latching on to her.  She either getst stuck in a corner sitting upright or ends up standing up and they are all hanging under her. 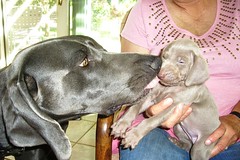 We took a little time to clip their nails and put clean collars on them.  All of them were very well behaved and got lots of love during the process.  Uncle Lyric came over to inspect and for the first time, expressed his approval by giving the little puppy some much deserved kisses.  He was so gentle with the baby, Liz and I were so proud.  He will make a great uncle and guardian for the puppies when Roxie comes home.  Later, Gramma Rayn came to check in on the status of the nail clipping as well.  These are some very lucky puppies to have such a loving and protective family to watch over them.

Once the “chores” were done, we took each puppy outside for an individual photo shoot.  It was their first time outside and they were excited about the sights and sounds.  It was interesting to see which ones were curious and wanting to wander around or toward the squeeky sound and which ones were  more interested in staying put.  We let some loose on the grass and most of them started eating it.  Black Boy (who was collarless for pictures) wandered around quite a bit as well as Lime Boy who had his nose stuck in the air most of the time.  Here is video of Lime Boy exploring the grass:

We got some really good photos and some photos that would have been better had they not been blurry. It’s kind of hard to get good closeup shots when the puppy is moving and so am I trying to get the camera in front of them. 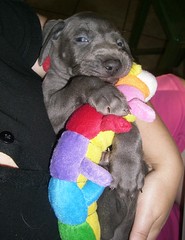 After pictures, Liz and I relaxed for dinner and a movie while the dogs and puppies rested.  When ever possible, I try to have a puppy in my arms to snuggle and soak in as mush puppy breath as I can.  They are so sweet and love to snuggle, until Mom comes around then all they want to do is get to her and feed.  I get a lot of puppy breath because  they are usually licking my chin or sucking on my nose or chewing on my ear :).  I love them.
Before bed, we needed to feed the puppies and so began my fist lessen in puppy feeding.  Lavender Girl hasn’t quite figured out how to eat normal food so she just licks it making her take as long to eat her food as it takes all eleven other puppies to eat their food, two at a time.  While I stood in their gated area and presided over the food and puppy swapping, Liz scooped the appropriate amounts of food into their bowls and helped make sure they stayed in their own bowls and none of them wandered off the table.   Some breeders will put puppy food in the bowl and let the puppies fend for themselves.  Liz has decided against that method and wants to be sure  that 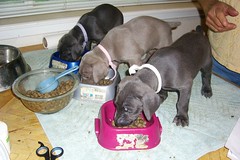 each puppy is getting the right amount of food.  This method takes longer but it’s also kinda fun to watch them eat.  Some make noises while they eat, some stand in their food bowl, some get bored with their own bowl and venture over to another food bowl.  All the while, three were eating the others were literally nipping at my feet and ankles and rearing up on my calves awaiting their turn.  Ouch!

Sunday morning it was time for feeding again but this  time, Liz did all the work while I took pictures and video.  Lavender Girl did much better this morning and ate regular wet food instead of mushed food from the previous night.  Here’s video of some of the puppies eating.

After breakfast, I packed up Roxie and we headed home.  She checked out the house when we got home ensuring everything was in its place and maybe even looking for puppies and then she’s been sleeping the rest of the day.  I think this is probably the first time in five weeks she’s been able to really sleep.   It’s hard to get much sleep while at Liz’s house with three other dogs around and making noise and then once the puppies arrived, she’s been busy being Mom the rest of the time.  I also think she’s missing her babies cause she’s just got that sad look on her face all the time.

This week, I won’t be adding a slideshow of all the photos from this visit because there are SO MANY from the individual photo shoot.  Each puppy had more than one that was good and I just couldn’t pick just one.  Also, in order to know who is who (if you can’t see the collar) is to read the image name.  And then there are some pics that you just need to read the decription.  So, here is a link to see the pictures with their title and description.  Or click on any photo above to go to Flickr.  http://www.flickr.com/photos/reneeviehmann/sets/72157624192106185/detail/