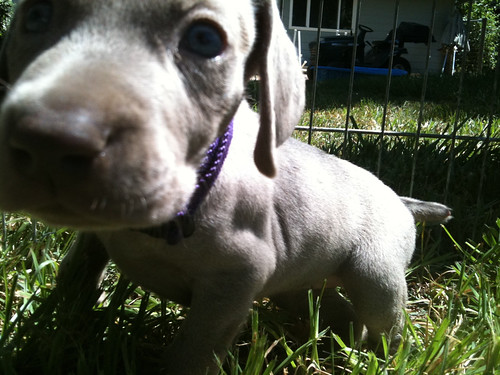 Went to see the puppies again this weekend.  But I forgot my camera!  So the pictures  and video here is from my iPhone.   The puppies are now fully mobile and playful and happy.  Upon arrival, Roxie ran straight to their pen and wanted in.  I let her in and they immediately mobbed her.  Roxie had far less milk this time than she had on Wednesday when Tate took her to visit.  What she had left, they cleaned her out.  Shortly thereafter, Roxie was DONE and let herself out by jumping over the pen.  For the rest of the visit, she wanted to be near the pups, but they were just too much for her so as soon as she was let in, she wanted out.

At one point, I decided to help relieve her anxiety and took one out at a time for her to be with.  Unfortunately, I wasn’t able to get video of her one-on-one mothering.  At first, I thought she was trying to eat the puppy because she had his whole head in her mouth, but Liz assured me that she is just trying to teach the puppy manners.  It’s unfortunate that there are so many of them because they are just too overwhelming for her to spend any amount of time with them to teach more manners.  although, with Grandma Rayn and Uncle Lyric around, they help keep them in check when Roxie isn’t there.

Sunday morning we gave them all shiny new collars that will continue to grow with them until they go to their new homes.   Unfortunately some of the new collar colors don’t match up with the old collar colors so we’ll have to reassociate some of the puppies with new colors.  We trimmed their nails and then let them play in the grass.  We also set up the puppy pool and they all came to play.  I left the hose dribbling into the pool and lots of them really liked the “water feature”.  Some sipped from it, some got their heads wet, some walked under it.  By then it was getting pretty hot outside so it was time to head in for feeding and naptime. 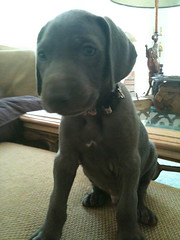 Their weights are good, ranging from the smallest, the blue female, pink elephant collar (was lavendar),  at 6 lbs to to the biggest, blue male, blue collar at 8 lbs.  The funny thing is, the are all getting the same amount of food so it’s a wonder how on earth they are ranging in size.

Liz comments that this litter is so calm and sweet as opposed to the last two litters that “weren’t”.   All of them lay sweetly on their backs in the cradle position (as you see in all my pictures) and when trimming their nails all but one of them just hung out completly relaxed.  Some of them even fell asleep.  The one that was wiggly apparently had to pee as it dribbled out of him and down Liz’s leg.  Woops… he tried to tell us!

The whole time I was there, I tried to spend quality time with each of the puppies and give them individual love.  I dont think I got through all 12 of them though.  I’ll have to try harder next week :).  I did find something interesting, Snake Skin collar boy (was white collar) has a sideways lighting bolt on his chest so I’ve decided to call him Harry.  Maybe his new owners will keep the name 🙂

By the time it was time to go, Roxie was READY and waiting at the door.  Until next time, here are the photos and video from this weekend’s visit.  Enjoy!