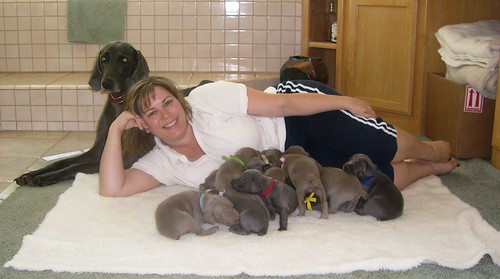 My name is Renee Viehmann and I’m from Northern California and recently moved to the Bitterroot Valley in Western Montana.  My first Weimaraner was Winston and he was 9 years old when I met him.  He was a great dog and remarkably calm for a Weimaraner.  He passed away at the age of 12, Christmas of 2006.  In search of a new family member we agreed 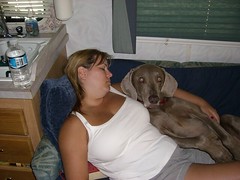 on another Weimaraner but my conditions was that it couldn’t remind me of Winston and it had to be smaller.  So we were in search of a female Weimaraner and one that was blue.  We searched the rescue groups but there weren’t any in our area and if there were, they were adopted before we had a chance to fill out an application so we began to interview breeders.  We found quite a few, most of which weren’t really considered reputable.  But of everywhere we searched two names kept coming back as most reputable, Anne Taguchi of Touchstone Weimaraners and Liz Fairlee of Fairhaven Weimaraners.  We ended up going with Fairhaven as they were expecting a larger litter and were much closer (only 2 hrs away).

On April 6, 2007, Roxie (and a bunch of other puppies) were born.  One of the blue females was to become a service dog and the other, was to be our Roxie. but which one would she be?  Pink or red collar? Upon meeting them at 19 days old, we knew red collar would be ours.  She was way to dominant to be a service dog. 😉

When the puppies were evaluated at 5 weeks old, we learned that Roxie, despite her blue coat color was pick of the litter!  She had excellent conformation and Liz had high hopes for her future.  Since Roxie’s mom was getting older, there would only be one more litter and Liz wanted to continue the line after Rayn was finished being a mommy. So Roxie came with some conditions.  She was co-owned with Liz with an option of breeding her at 2 years old.  But before that, she had to be shown in IABCA shows to earn a conformation title as well as earn a title in one other area.  We chose hunting.

Neither of us had ever hunted before so it was going to be a learning experience for all.  I loved watching her work and do what the breed was bred to do. In addition, I enjoyed getting out in the field and working with her.  As it turns out, I took on more of the field training role and ended up handling her to her AKC Junior Hunter title.  I enjoyed it so much that I decided to keep going with the goal of Master Hunter.  Eventually, I settled for Senior Hunter as Master Hunter was more of an “obedience” in hunting title and as hard headed as Roxie was, I opted to not fight it and be happy with her success.

During all of this, I had joined Liz in the fight against the WCA to remove the disqualification of the blue coat color, which eventually failed.  At the same time, the Blue Weimaraner Club of America (BWCA) was formed with Liz and myself at the head.  As of 2011, new members are leading BWCA however, I am still involved.

In 2010 it was time to breed Roxie and I wanted to be involved in the process so once again, I became Liz’s personal hemorrhoid :).  I traveled to Oregon to mate her, I was there and helped with the whelping all while working full time.  I drove back and forth on weekends to help Liz with whatever she needed.  Trimming nails, weighing, cleaning up poop, poop and more poop, took pictures, and blogged the heck out of the entire experience (read all about it HERE).

When it came time for Roxie to breed again, Liz had decided to retire from puppy rearing and handed the reins to me and the rest is history!

2013 was my last litter with Roxie.  She is almost 15 years old now and still doing well.  In 2019, I brought home Millie with the hope of producing another litter.  Millie is almost three years old in early 2022 and breeding her has been delayed for over a year due to a multitude of issues like the COVID pandemic, health testing issues, and moving to Montana.

I hope that this has given you an insight about me.  If not, and you have more questions, feel free to contact me and we can chat some more.