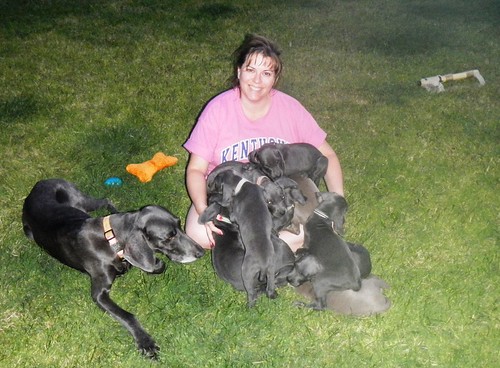 I know, I know… it’s been TWO WEEKS!  Funny, the lack of blogging coinsides with having started my new job.  It has been an exhausting two weeks.  In order to ensure that the puppies are fed, area cleaned, poop picked up I’ve been getting up at 5:00 am every morning. I come home for lunch to feed them and then come home after work to feed them again and get anything done that needs to be done.  This means I don’t get to bed until at least 11:00.  I’m so fortunate to have wonderful neighbors helping out.  Nicole has been coming over every day at 10 and 3 to check on puppies while I’m at work as well as helped out on the weekend when I was unavailable.  She loves time with the puppies!  Rose has been helping me with toenail trims and taking stacked pictures.  Tracy has helped me introcude them to swimming and helped with Volhard testing.  Chris has been helping with bird work.  Now, my mom is back in town to help me get them ready to go to their new homes.  I’m so fortunate!!

So, what have we been up to in the last two weeks? 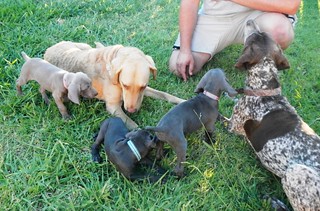 I was gone most of the weekend with pre-arranged plans so I didn’t get a chance to do much with them over the weekend.  This week they got to meet some BIG dogs!  They met Willow, a Cheapeake Bay Retreiver and Elle, a GSP.  Both were very good with the puppies and allowed them to crawl over them, bite tails and chase balls with them.  So for those who are taking a puppy home to another dog, they should do just fine!

Doggy Door Update – as of late last week, I opened up the doggy door to the puppies on a full time basis.  They now are able to come and go from their little corner of the kitchen through the laundry room and out the doggy door out onto the outside play area.  They are doing really well at going outside to potty with the exception of the occasional laziness when they potty in the litter box instead.  If their new owners can keep up the routine of taking them outside to potty every couple of hours, they should potty train easily. 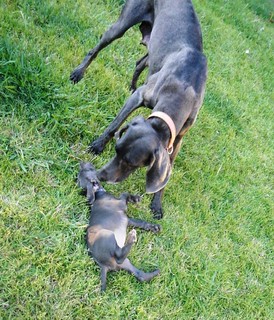 do.  They are all curious, playful and excited. None of them (so far) have been shy or afraid and wanting to go back with their siblings.  They usually want play with Mama and she will play a little bit, but then they try to sneak in a suckle and she growls at them to stopit.  She does a good job of showing them who’s boss and puts them in their place.

The puppies will start going home this weekend with lime, teal, yellow, green, blue and Covey all going home (so far).  At the moment, I think I will be OK letting them go…. we’ll see how it actually goes.  My next post will show photos of the puppies as they head to their new homes with their families.  You’ll get to see who went where and what their new names are.

As of now, there is only one puppy left, hot pink.  Since she is one of the top picks and should be able to earn her AKC conformation championship as well as a Field championship, I’m hoping I can find an owner willing to give her a chance to do that.  To see more about her or share her link, click HERE.

I think that’s all for tonight.  Gotta go feed the babies before bed.  G’nite all! 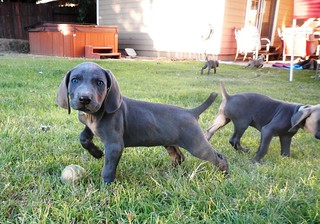