April 2014 Benelli attended NAVHDA’s Natural Ability test in Ione, CA.  With perfect scores for Hunting, pointing, search, tracking, and slightly less then perfect for desire and cooperation for being hesitant to go into the water, Benelli earned a Natural Ability Prize 3.  The strangest thing was that she was happily swimming before and after the test, just not DURING the test.  So she earned a Prize 3 instead of a Prize 1… it doesn’t accurately describe her hunting ability and desire. 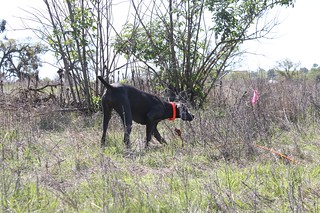 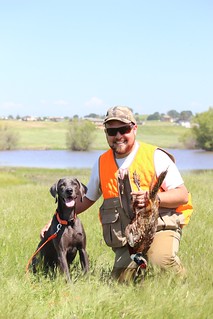 January 2015 Next up was conformation. I entered her in the January IABCA show in Santa Rosa, CA.  Co-owner, Jaclyn had been working with her at home and when Benelli came to me, she was doing very well and I was anxious to get her in the show ring.  Unfortunately, she was a bit squirmy with the judges so I worked with her all week.  I was unsure if I was going to show her after all but decided to go to the show anyway.  5 minutes before the show, I decided to give it a shot.  Benelli showed nicely, while still being squirmy with the judges but they forgave both of our inexperience (it was my first time showing too) and judged her on her conformation.  She earned the three V1 ratings she needed in order to earn her International Championship.  Jaclyn, Noah, Benelli and I went home happy for the weekend. 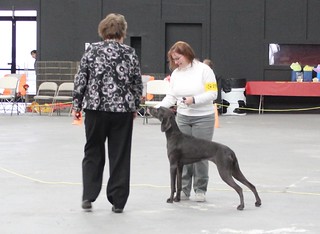