Hmm.. Sounds like an interesting couple of days doesn’t it?  Over the last couple of days, things have been very busy around here.  Not only do I have 10 puppies to keep and eye on, but I’ve been getting ready to build a patio pergola so that the puppies have a place to hang out when they are old enough to spend some time outside (and for me too).  So here’s what we’ve been up to…

Saturday – The puppies got to meet their first small humans!  Thanks to my friend Christine, she 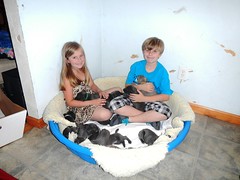 brought Brenden and Rylee to play.  Everyone did great until poor Brenden’s allergies kicked in and he had to distance himself from them.   Puppies like small humans… please bring yours over to.  Next on Saturday was new owner Jack.  He’s new to Weimaraners and is very excited to bring his new baby home.  Unfortunately, his family couldn’t make the trip this day so they pled for him to sneak one home with him.  They promised to bring it back the following day.  Sorry, kids.. won’t work, you’ll have to come back next time.  they can’t wait to meet you!

Later in the day, I introduced the puppies to their first quail wing.  Thanks to Jack who brought fresh wings from training earlier in the morning.  At first, they were all sleeping so they really didn’t notice.  Roxie hopped in and swooped up the wing and tried to eat it.  Later, I gave them the wing when the were all awake to see what happened.  Seems that lime and red were most interested but lime REALLY was interested.  He even picked it up in his mouth several times.  Below is video of the event:

Later in the day, I started to test the puppies on a new floor surface and all by themselves.  With their ears opening, they can hear some things so I gave them verbal and visual stimulation to get them to come to me.  I even tapped on the floor to get them to come towards the vibrations.  Some of them did well, others just sat there and cried and turned in circles or moved away from me.  Those who came to me got lots of praises and love.  Well, everyone got that anyway.  I finished the remaning puppies on Sunday.  Below is the video of the events. Note, it’s a long one so get yourself something to drink and sit back and relax… if there are dogs in your house, you may want to put them away if they are sensive to a puppy’s cry: 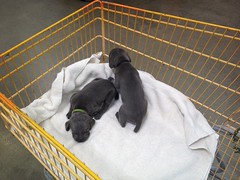 Sunday – Had to go to Home Depot to get some stuff for the construction so I decided to take two of the puppies with us.  Lime and black were the luck travelers.  We loaded them into their travel box and headed out.  We arrived at Home Depot and got them a shopping cart and set them down inside with their towel.  They wandered around the basket and sniffed around while trying to maintain balance while the cart moved beneath them.  I held one while the other one rode and several people came up to ohh and ahh over them (I mean really, who 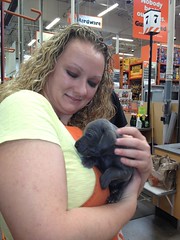 wouldn’t?).  when it came time to check out, the cashier ladies couldn’t stay away. They just had to give them some love.  One nice lady came back in between customers to snuggle black boy.  There were a few small humans in line behind us and they too got to give the puppies a pat on the head.  During the car ride, they did very well and mostly slept (much like human babies).

Later in the day, I decided it was time to move the whelping box from the master bathroom to the office.  This move mainly came becuase while getting stuff ready after Home Depot, TWO puppies had climbed out of the whelping box and had snuggled up on the floor next to my bed.  With that, it was time to move them to a place where escaping isn’t such a bad thing.   With them being in the office not only is it a little bigger than the bathroom leaving room for an out of box 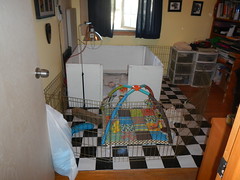 play area that can be blocked off by a small x-pen, but it’s where I spend most of the time during the day working on the computer so I can keep an eye on them and Roxie can lay next to both of us.

After setting up the playpen area, I decided I wasn’t ready for them to start freely climing out of the whelping box so I put in a taller door so that Roxie could still get in, but they could not get out.  They can wait a couple more days.  I did put a couple of toys and the play mat in the box for them.  They really liked them!  A few of them immediately took to the stuffies and they started biting at the play mat floor. I guess the designs and shapes made 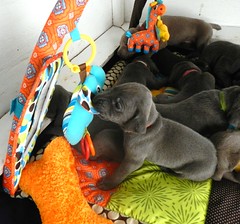 them really excited. They also played with the dangling toys.  When it came time for Rpxie to nurse, she just went in and layed down right on the mat and did her thing. It was kind of humorous watching her try to squat under the arches of the mat without laying down until she knew where everyone was.

The puppies are really starting to play with each other, and bark and growl.  In fact, yellow was really pissed off about something a minute ago. Everyone was all piled up and she was on the outside barking and growling and having a fit!  I gave her the Cesar Milan “shhht” and touch and she quieted down.  Then I made Roxie get in and feed them.

Monday – My mom (Nana) and step dad (Papa) arrived to help build my pergola.  Not much happening but boy was she happy to be back to see the babies.  They have almost doubled in size since she saw them!

Tuesday – Construction day and introduction to grass.  After a long day of chaning design plans and making decisions about how the pergola should be built, I was anxious to get to the puppies and take them outside.  The grass had just been mowed, poop picked up and Easy Up awning put up for shade (although we didn’t need it).  We took the puppies out in groups of five and put them down in the grass.  Mama came to supervise and almost immediately layed down to allow them to nurse. This was interesting to me since she has not wanted to nurse them during the days.  I’m thinking that it’s just too hot to allow 10 puppies to maul her.  Now five, and outside in the shade and cool grass? WAY more doable.  So she did.  The first group consisted of red, black, yellow, teal and lime.  They started to nurse but then I was able to move Roxie away from them so they could explore.  And explore they did!  They scented the air and grass, moved all over the area and posed nicely for pictures.  Red even walked away from the others to do some potty business, what a good boy!!!  Eventually, this group got to nurse on the grass then cuddled up together for a nap before going back in the house.  Later, it was time for group 2 consisting of hot pink, Covey, orange, blue and green.  However, it was later in the day, we were losing daylight and it was time for me to cook dinner so we didn’t have much time.  I woke the group up, took them outside and put them down.  They pretty much stayed in one place and once again Mama came and layed down to nurse.  All but blue took the bait and he stayed where he was and slowly got up and moved around.  I tried to get Roxie to move away from them but she just kept going back so I gave up and decided I’d try again tomorrow.

Below is video of their first experience in the grass.  I took video for several minutes of both groups then commenced with still photos.

Ok, that’s all for tonight.  Tired and heading to bed.  Another long day tomorrow.  I’ll try to repeat the grass intro for group 2 and may to an intro to water… we’ll see. It might be too much stress for one day.  Until next time, have a great week!