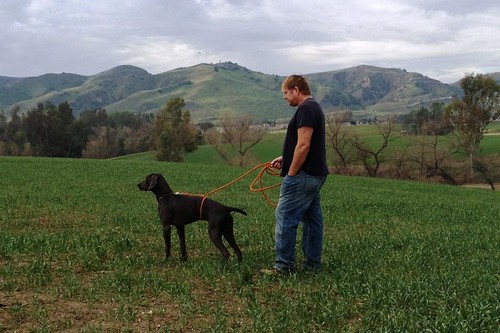 April 14 2013. It was a cloudy cool day at Prado dog training facility. Perfect weather for natural ability test. Blue and I were running 4th. The dog that ran first is a pudelpointer that we have been training with, Crash. Aptly named. He has been one of the strongest dogs in all events during training. He went out, came back 20 minutes later and the owner said he didn’t point at all. Uh oh. As they have been telling me, anything goes on test day. Blue and I went out and Blue was off to a good start, his searching was more active than usual, It took about 7 minutes to find the first bird, a perfect point and hold. I kicked the bird up and  Blue chased it for about 50 feet, then came back. We continued, the next bird he found quickly and pointed very briefly, then the bird took off and started to run so Blue chased it, caught it, and kind of brought it back. I say kind of because he brought to within 5 feet of me and decided it was to good to give up. the judge told me to get the bird, which I did. we continued on and within 1 minute he was locked into a picture perfect point, which he held until I flushed the bird. He briefly chased, then back to hunting. I mistakenly thought that after two pointed birds the field test was over, but no. we still had 5 minutes. Blue searched for about 2 minutes and then locked on again. This time when I flushed the bird he took it out of the air. He was so proud of himself he brought it right back to me. So at this point I wasn’t sure how we had scored, 3 great points and 1 quick point. We went in and the observers were all congratulating me on how well Blue had done. I felt better, but was concerned about the 1 quick point. We went in and waited for the rest of the dogs to run. Then break for lunch.

Tracking was next, I was worried. This has been Blues worst event. he had been good on dead drags all week, but this was a live pheasant. Our turn came, I had Blue lie down at the feathers, he took a good whiff , got excited, and I said “track”, which he did for about 50 feet. Then he lost the scent he crossed back and forth a few times looking for scent, didn’t find it.  He then came back to where we were, and actually went behind us for 30 seconds before he came back to the feathers. Then off he went nose to the ground, made a couple of turns (that the bird had made), and slowed down. He was in waist tall grass, lifted his head up a couple of times looking for scent, then head back down and searching, he actually went past the bird, caught the scent , turned and pointed, held point until the bird started away, then he grabbed it.  Whew! Myself and everyone watching thought he nailed the track.

OK I thought, swimming has been his strong suit. We are home free. Not so. By now its 5 pm and getting cold and windy. When I threw the first bumper Blue didn’t go straight in, but coursed the shore looking for another way. With some urging he went and got the bumper. The second throw wasn’t very far, so with the wind, the bumper immediately began to drift back toward us. He did go get it, but by then he only had to swim about 6 feet. The judges asked me to throw another which I did and he went and got it. I was so relieved, my trainer was there and told me 99% sure Blue earned a prize 1. 99% sure.

When they read his scores there was an audible gasp by a few, who really thought Blue was in contention for highest score of the day. Not so. The good news , he passed with a prize 2. I was so proud of him !!! I began the day just hoping he would pass, but after his performance, i got greedy and wanted a prize 1. Oh well.

All in all it was a great experience, a lot of fun and very enlightening . I love Blue !!

I’m so very proud of Garret and Blue!  For more information about NAVHDA and the Natural Ability test click HERE