The U.S. Military developed a program in the 1970’s called “Bio Sensor.” (Became publicly know and is often referred to as the “Super Dog” Program.) The program was developed to improve the performance of dogs used for military purposes.

The basic premise of the program is that early neurological stimulation exercises could affect the performance of the dog. The Army’s research revealed that early stimulation of the puppy from the 3rd day through the 16th day influence rapid neurological growth and development.

Below are the five  Bio -Sensor exercises designed to stimulate the neurological system of the puppy. I have incorporated these exercises into our daily puppy routine. Each puppy is put through the following exercises once daily:

1. TACTILE STIMULATION – Holding the pup in one hand, the handler gently stimulates (tickles) the pup between the toes on any one foot using a Q-tip. It is not necessary to see that the pup is feeling the tickle. Time of stimulation 3 – 5 seconds. 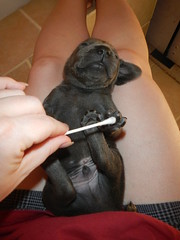 2. HEAD HELD ERECT – Using both hands, the pup is held perpendicular to the ground, (straight up), so that its head is directly above its tail. This is an upwards position. Time of stimulation 3 – 5 seconds. 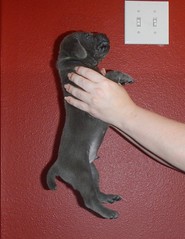 3. HEAD POINTED DOWN Holding the pup firmly with both hands the head is reversed and is pointed downward so that it is pointing towards the ground. Time of stimulation 3 – 5 seconds. 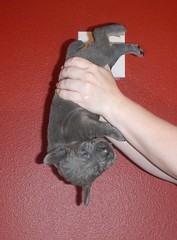 4. SUPINE POSITION – Hold the pup so that its back is resting in the palm of both hands with its muzzle facing the ceiling. The pup while on its back is allowed to sleep struggle. Time of stimulation 3-5 seconds. 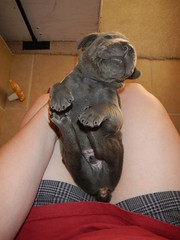 5. THERMAL STIMULATION – Use a damp towel that has been cooled in a refrigerator for at least five minutes. Place the pup on the towel, feet down. Do not restrain it from moving.
Time of stimulation 3-5 seconds. 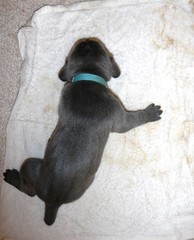 These exercises improve the development of the puppy’s neurological systems by early stimulation and stress. Five benefits have been observed in dogs that were exposed to the Bio Sensor stimulation exercises: