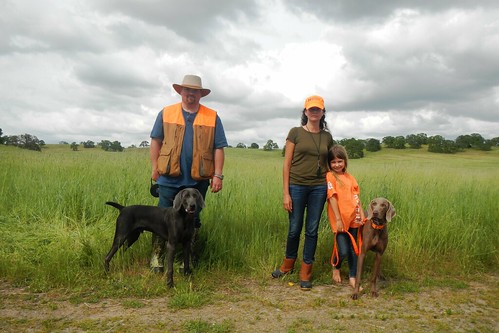 Coen and Ava participated in their Natural Ability test on Sunday, April 7th.  It was a beautiful day and everyone was anxious to get started.  Coen was 2nd in the lineup and Ava was 4th.  The rest of the days group of dogs were all Wirehaired Pointing Griffons 2 Weims, 7 Griffs.  Test order for the day was 1) Swimming, 2) hunting & pointing, 3) tracking.  We were a little concerned with swimming being first because it was chilly and who wants to go swimming when it’s cold out?  But it was also damp and they grass was tall and they were hoping it would dry out a bit before planting the birds.  Afterall, chukar do not like to fly when they’re wet.

Coen:  From what Jack had told me previously, Coen LOVES swimming.  He has a hard time getting him out of the pool in the summer, so he wasn’t concerned about this part of the test at all.  You can see Coen’s swimming part of the test in the video below.  Coen, the Blue Weimaraner FISH!

The next part of the test was the hunting and pointing portion.  When he was let loose, he had a good nose and found FIVE birds, unfortunately, he didn’t point any of them. On the bright side, his training with Brad is strong as when the birds flushed he did exactly as he was trained to do… stop and watch.  Good boy!

After the hunting portion was the tracking of a live pheasant.  They pluck the flight feathers and release the bird to run away.  He did really well at training a couple weeks before so I thought he would be OK on test day.  However, he only tracked a little bit.  They gave him several opportunities to pick up the track and go with it, but it just wasn’t enough.

Ava:  Ava arrived a day early so we could check out the test grounds and work some birds.  She has been training in SoCal for a couple of months and was doing good, but needed a some work on her pointing.  Plus, after what happened to Cristi and Covey, we wanted to be sure that she would swim at that location.  After a long day of practice, we were hopeful that she would do OK.

Come test morning, we were a little concerned that there wasn’t any time to let the dogs run before it was time to swim so when it came her turn, Krista threw the first bumper and cast her off to get it and she just ran around.  Turns out, she had to poo.  The judges were very helpful and encouraging and eventually, she did swim.  They made her swim a third time just to be sure.  Below is the video I took until they realized I was taking video and asked me to stop.  I’m pretty sure I was hooting and hollering for her as much as Krista was.  After she swam it was a HUGE sigh of relief.

After swimming was the hunting portion.  When Ava was released, she took off like a bat out of hell and in my opinion was going too fast to smell ANYTHING.  She ran with so much independence she was 100 yards away in ten seconds.  We had a hard time keeping up with her.  After a short while, I saw Krista’s hand go up indicating that Ava was on point YAY!   She eventually found one and pointed it briefly before going in after it and flushing it.  She took off after it and eventually came back on her own.  She didn’t find any other birds so they planted on for her.  She found it relatively quickly and without a pause tried to pick it up. Time was up. We didn’t know if the first point was going to be enough.

Then it was time to track.  When released she ran around for a while and after moving up a couple of times, she finally picked up the track and tracked it for a ways.  She found the bird and flushed it.  She did not point that we could see.  The grass was very high so if she pointed, no one saw. Had she pointed the bird on the tracking course, it would have counted towards her pointing score.

So at this point, we were hoping that the one point would at least be a 2 which (I think) would have earned her a passing score.

With the announcement of the scores we all were very disappointed, as could be expected.  You work so hard and pray for miracles in the lacking of areas and end up with no prize.

Honestly, regardless of the few areas where they didn’t do well, I am so proud of Krista & Ava and Jack & Coen.  They worked very hard and even though they didn’t score enough in a couple categories to earn a prize, they had excellent scores.  The judges reminded us this is one day, maybe 30 minutes that they got to see the dogs work and sometimes, for whatever reason, the miss the mark. Also, these puppies are 11 mos old, it’s entirely possible (probable) that they are late bloomers.  I have no doubt that they HAVE the natural ability (have you SEEN their father’s hunting videos?).  Coen will make a great hunting dog for Jack and his family.  Ava will too.

At this point, I don’t know if Jack or Krista will plan to test again.  They will have one more opportunity in August before they turn 16 mos old.  We shall see.

Again, I can’t say it enough I AM SO PROUD of Jack and Krista for what they have done.  THANK YOU!