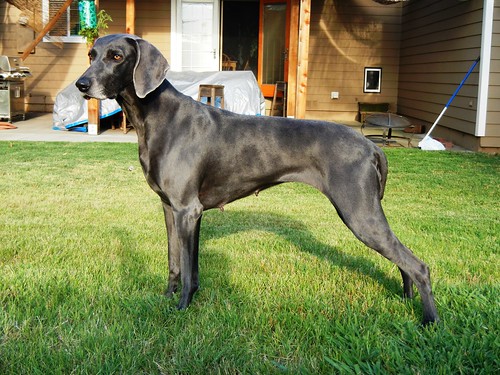 Well it’s official!  Roxie is indeed pregnant!  We visited the vet today and she performed an ultrasound and saw a bunch of little walnuts floating around inside her belly.  She is estimating between 6-8 puppies but there could be more hiding.  She felt that they were a little small for 29 days so maybe they are more like 27 days but again, they could be slow growers.  We are still shooting for a 6/20 due date but we won’t freak out if she is a couple days late. 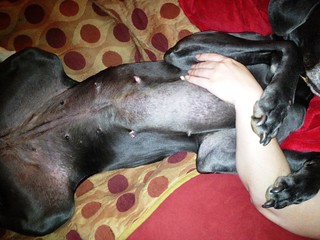 This week’s belly shot looks to show some swelling but other than that there are still no other signs.  In the past, around this time frame she would have a loss of appetite but not as of now.  Now that pregnancy is confirmed, she gets some extra special treats!  She’ll start getting a once daily prenatal vitamin, eggs for protein and I’ll slowly start switching her to puppy food for the extra goodness that it brings. 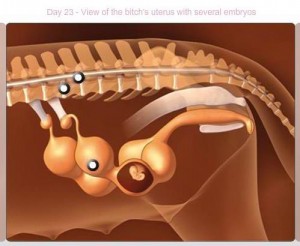 To the left is a graphic of what it looked like on day 23 inside.  Each puppy has its own room inside the womb, similar to fraternal twins in humans.  There are two set of “horns” one on each side.  At birth, they move their way down and out.

This is all VERY exciting!