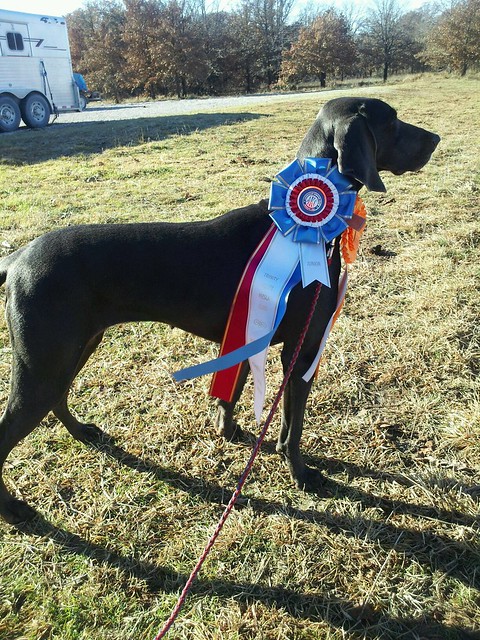 The Journey to Junior Hunter

Cov·ey /ˈkəvē/ noun: covey; a small party or flock of birds, esp. partridge.  My little blue girl was properly named.  Covey is a bird hunting maniac.   Our bird experience started as soon as I got her home from the breeder.  A few minutes a week, I would toss a frozen bird or wing for her to track and find.  As each week passed, the desire for birds intensified.

Fast forward a year, Covey and I were traveling to a small town just south east of Nashville, TN in Oct 2013.   You may ask if there were no birds closer to Louisiana?  We have birds to hunt but we were going after our goal of achieving enough wins to earn our AKC Junior Hunter title.  To earn a JH title, you must qualify four times in an AKC hunt test.

The TN trial was a special test because it was a double test. That means we have four chances to qualify.  The sun slowly appeared as the crisp cool air rushed through the fields.  Dogs are barking in excitement as handlers got nervous.  Covey was braced with a GSP.  The dogs took off like a bullet.  Working the fields, tree lines, and brush in search of birds.  Despite Covey’s best effort, she didn’t locate a quail.  (Fail)

Temperatures are slowly rising to nice fall comfortable temps for hunters.  However, temps rising means dogs will get hot and start to pant.  By panting they are releasing body heat, but not able to use their nose to smell.   Covey was braced with an Irish Setter dog.  The dogs take off with speed and grace as they race each other in play.   As Covey ran back to me to “check in” with me, I reminded her of what we were supposed to be doing… “BIRDS.”   As if I flipped a switch in her brain, she started hunting hard. Climbing through briars, thick brush she was determined to find a bird.     After about 15minutes, she was able to locate ,point some quail.    As soon as  birds flushed, I fired my gun with pride.  (PASS 1)

Second day in Tennessee brought in thick early morning fog. Covey and her GSP  bracemate were hot on the trail of birds.  Despite their best efforts they both came up birdless. (Fail)  On our last run of the day we were braced with a Vizsla who was inexperienced.   Covey went straight to work and working at a great distance with confidence from me.  I raise my hand so the judge knows that I see my dog on point.   Flush of the bird and one shot fired.    perfect!!   Second point!!!  Another shot fired!    Having 2 wins out of 4 made our trip home a lot more exciting.

With excitement from our first two wins, I quickly found another hunt test that was drivable for Covey and I to attend.  What better way to end our first Show Year but with our JH title! December came and brought ice and snow to north Texas.  On top of snow and ice, I was sick.  Call it bird flu if you wish because I wasn’t letting it stop us from bird hunting!

Our trip started off to a rocky start of what should have been five and half hour trip into an eight hour trip.  Between coughing and sneezing I’d remind Covey and myself “BIRDS.”   Early morning came, and we are first dog on the start line.  Holy smokes its 19 degrees and 40mph wind.   We are CRAZY to be out here.  Once again we were lucky that this was a double hunt so we got 4 chances in a weekend to get the last two wins needed.   Covey is released with a vizsla who wont leave its hunter’s side.   Praying Covey will have the desire to hunt away from this dog was filling my head.   After 15minutes, and no birds by either dogs, I’m getting nervous.   Over a hill, Covey spots water and starts working the brush around the water hole.   POINT!!!  I can barely get my hand up because of the layers of clothes.   Firing of my gun brought me such relief and pride for my girl.   (Pass 3).

Its 4pm and we are running our second brace of the day.  Remember we first ran at 8am and had to sit in our van for warmth till 4.   We’re braced with another vizsla and its that dogs’ first hunt test.   One learns very quickly when doing these hunting events to listen to the older experienced handlers.  One great advice I learned was to limit your words to your dog.  It was obvious this guy was never told this tip.   Every time covey would be about to go on point, he would yell for his dog.  It would break Covey’s concentration.  Truth be known, if there was a bird near by, nothing could break Covey’s concentration.

I finally get a chance to work away from this handler and give my dog a chance to work.   Sniff, sniff,……she is hot on scent.   She goes on point, and VOOM!!!! Vizsla rushes by and flushes up the bird.  My gun wouldn’t shoot.    I hear “times up” spoken by the judges.   (Fail-  dang it!)     I was desperate for that win because I really wanted to relax in the hotel room the next day and go home early.

Final day.   This is it Covey!   My heart sinks and when I realize I’m paired up with that same handler that we failed with the day before.  Ashamed in how I felt, I knew it was my job to show sportsmanship.  I get to chat with him and find out he is a pretty cool fella.   I offer some tips of being quiet and trying to not nag his dog.   He is to trust his dog and know the dog’s body language.  By talking, my nerves eased up.   Judges arrive on their horses and tell us to release the dogs.    First opportunity I see to work away from that handler, I take it!  He is back to nagging his dog.  Covey only need two words from me . “BIRDS” when I release her and “Come” when we’re done.    12minutes into hunt, Covey finds her bird. Fire the gun.  Personally I wanted to put a leash on my dog right then, do a silly happy  Title dance and thank the judges.  No can do, still got time on the clock.   Covey is really working and finds another quail.  Point!     Judges say “times up and call to leash your dogs.”   Co??????    Judge looks at me as if I’m not listening.   I look to her in shock and barely whisper  that I have no voice.

Covey is continuing to hunt…..If I don’t get my dog I can loose this title for the dog not co-operating with me.   The judge kindly whistles for Covey. I drop to my knees so that Covey thinks I have something interesting.   With a death grip on her collar, I leash her up.  A wave of my hand in a thank you gesture for the judges and I mentally do my happy dance.  Covey is now InCH. Bluerivers First On Point, JH, NAVHDA NA3!