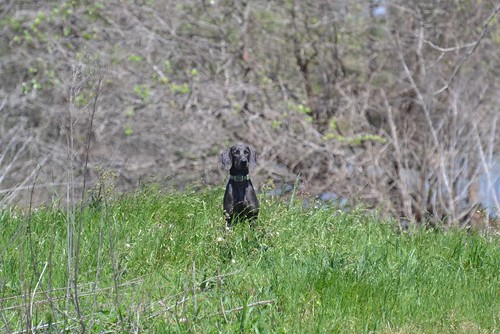 The day was perfect weather except for 25 mph wind…yes, 25!  We were 5th puppy out of 10 in the lineup.  The day is divided in three sections.  First, everyone must do the bird search.  Covey and I walked up to the line.  Judges were very helpful and answered any questions.  When I was ready, I released Covey’s collar and told her “birds.”  Zoommmmmm!  She was off and on a mission.  Instantly her nose was on the ground and tail wiggling.  Zig and zag.  When she was about 15 yards away, the judge waves his hat as a signal to the Gunner [to test for gun shyness].  I hold my breath, and BOOM!   Smile creeps upon my face because she didn’t even look up.  One minute later the judge signals for the final shot.  BOOM!  She didn’t care.  Three minutes in and she goes on point.   Holds point, I go to flush and she jumps in to help- It was just a quail wing.  She grabs it and starts hunting again with the wing still in her mouth, she pops up a quail.  She drops the wing and takes off about 80 yards to where the bird lands.  She was there to grab the bird and brought it back to hand!  I watered Covey.  Released her again and she slams on point.  She holds point about four feet away from the bird.   I flush up the bird and Covey takes off after it.  I let her go to the tree of the bird and call her back.  She instantly responded and with speed. 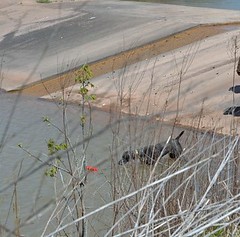 Once all 10 pups completed the bird search, we headed to the water test. That was interesting.  It wasn’t a regular pond.   We were up on a dam like area on the back of a pond.  It was CONCRETE.  There was slimy mud on the concrete.  Covey slipped and never trusted pushing off the embankment.  With the 25 mph wind, the bumpers thrown were coming back to us.  So Covey showed how truly smart she was.  She got all the way to belly deep, and waited for the bumper to float to her.  She’d reached it, and brought it back to me.  The next throw was a bit further.  She decided to run around the entire pond, up and down the embankment trying to find a place clear for her to get into the pond.  She was determined to find a place.  Then she heard a quail on the opposite side and ran to go hunt the bird.  She jumped in the water on that side of the pond, but it didn’t count.  The judges gave us on more chance.  This time it was with a dead quail.  She went in the water and her feet technically left the ground, but the judge beside me said he didn’t think it was enough.

The hard part had arrived.  I say hard part, but it’s the easiest part for the HUMAN.  You release the dog on the trail of the pheasant and just stand there and let her do the work.  The hard part is the fact we were TRACKING in 25 mph wind.  The track is never in the same location as the previous dog.  I saw dogs before us, running across everywhere.  Only once did I see a dog point the pheasant.  Ok, so it’s our turn.  I knelt down beside the pheasant/scent of the start line.  As I held her collar I told her to find that bird as I pointed to the feathers.  When I felt her pulling to go, I released her.  She went five feet up the track, returned to the start line, two feet opposite side and returned to the start line.  You can see how she exploded when she found the track line and she never picked up her nose….no playing around…no nonsense. STRAIGHT TO THE BIRD!!!!  POINTING for a 72 seconds according to my watch.  Then she jumped the bird.  The judge told me to go leash my dog.  That’s when she was totally puppy.  She took off with the bird.  What was a three minute track turned into six minutes of trying to catch the damn dog!!!  Over all, I have to say I had the best time of my life.  I’m not a hunter nor have I ever been to any NAVHDA training or tests.  I was completely new to it all.  The NAVHDA people were the most relaxed, happy, and helpful group ever.  We didn’t qualify because Covey had to swim at least twice.  Swimming requires their feet to not be touching any surface.  Her actions just weren’t good enough.

(scoring from 0-4 with 4 being the highest.  Each category has to score at least a 2 in order to prize)

We had so much fun that I’m trying to save money so we can attempt it again.  Looks like we’re leaving Louisiana again, but this time for Missouri in May. It’s the most amazing rush to see your pup do what it was bred to do.  Covey slept so hard that night 🙂

I am so proud of Cristi and Covey for their efforts in this test.  Sometimes, things just happen.  To read the blog from Roxie’s NA test, click HERE.