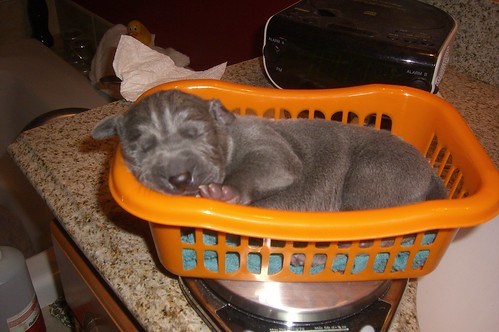 “That’s what little boys are made of”  Well, it describes our day as well.  It was a busy day for the puppies!  They are all pooped out!  First it time to wake up… since they were up all night feeding and making noise, they were sleeping when it was time to wake up!  Today was tails and dew claws day.  I had originally planned to take Roxie with me so she wouldn’t tear up the house when I left with her puppies, but it was forecasted to be a pretty warm day and I didn’t want to leave her, my mom and five puppies in the truck waiting so I decided to take a chance and leave her home.  I locked her in the laundry room with access to her doggy door and quietly moved the puppies out of the house.  They were split between two separate boxes because I wasn’t sure if we were going to swap them out once we got there.  Regardless, it made it more manageable to carry five at a time in the box instead of a heavier 10.  I stuck Mom in the back seat with the puppies to make sure they didn’t climb out of the box or go flying if I turned too quickly or had to brake. 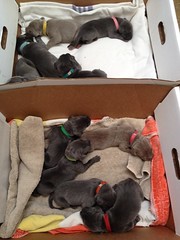 We arrived at the vet’s and brought them straight to the procedure room and waited for Dr. Metzler to arrive.  She was surprised to see how big they were but then I told her they were four days old.  There are varying opinions on how old Weim puppies should be when they have their tails done which range anywhere between 1-5 days with the vet wanting earlier and the breeders doing later.  I defer to the breeders.  I would have liked to do it at three days but that was a Sunday so had to settle for four days.

For those who have never witnessed the docking of tails and removal of dew claws, I will spare you the details.  It’s actually not that bad.  There is a little bit of screaming, and then they go back to sleep.  I think Mom had more of an issue with it then the puppies did.  It took very little time to do all ten puppies and with absolutely no blood! The towels and sheets in their box were as clean as they were when we arrived and so was I!

Once we got home, the puppies were famished and Roxie was desperate to see them so I let them have their time while I took a much needed nap.  When I woke up, it was off to the store to get some more people food and puppy food.  Just before dinner, it was time for day two of the Bio-Sensor program.  The puppies are mostly calm through each of the tests. But before putting them back, it was time to trim their nails.  They were already getting very long and I’m sure Roxie was getting sore from them scratching her already sore boobies.

I have previously noticed something strange with their nails.  Usually, gray weims have clear nails 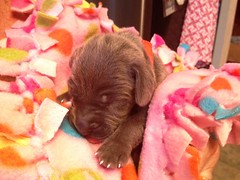 and you can easily see the quik and the blue weims have black nails so it’s hard to see the quik.  These puppies have all kinds of different colored nails!  They are all mixed up and some of them even have WHITE TIPS!  See orange boy here, he looks like he has a French Manicure!  The vet tech said it’s due to Roxie’s good nutrition?  I dunno.

Everyone is continuing to gain weight and eat well.  They are all getting lots of cuddle time whenever we have some down time.  I’ve uploaded some new pics.  I apologize that some of the puppies aren’t identified.  I try to get the collar color in the pics but sometimes it doesn’t work out.  Then I think I’ll remember who it was later then, I promptly forget.  For example, I THINK that’s hot pink girl in the basket at the top of the page.  I can’t even tell what color it is because of lighting in the photo.  I think that’s a pink nose!

There isn’t much happening for the next few days so I probably won’t be writing but I’ll stil try to post pics nightly.  Until next time… have a good week!

Renee, Roxie and The “First” Litter