As of last Sunday, all of the puppies have gone to their new homes.  The last one to leave was hot pink and she was the toughest to see go.  Not only did I have a week with her alone (with Roxie of course) but she was one of the sweetest puppies in the bunch.  She got some extra training and learned patience and how to “leave it”.  We worked on her potty training and crate training so that she was better prepared to go to her new home.  Below is a video of her and Mama waiting for food together.

Now that the house is empty, Roxie, Cheeto and I can get back to our regular routine of nightly snuggles on the couch, going in and outside whenever we want without puppy obstacles of baby gates, xpens, toys, poo, and the puppies themselves.  The house smells nice and clean again.  But with all that, I do miss the puppy snuggles, puppy breath and their cute little barks and grunts.

So, without further ado…. I’d like to formally introduce you to the puppy’s new names and their new families (in birth order).  In the future, you can see their family photos in their own photo gallery here: https://www.blueriverweims.com/galleries/photo-gallery/2012-litter/families2012/ 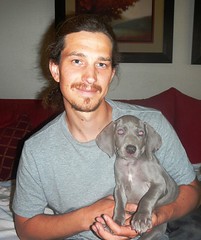 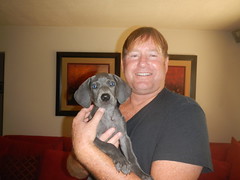 2) BlueRivers First Once in a Blue Moon “Blue” (blue boy).  Blue now lives in Laguna Beach, CA with his daddy, Garret.  They both are anxious to get out and do some training, hunting and competing in the field.  First up is NAVHDA’s Southern California Chapter Natural Ability test in April 2013

I am co-owning Blue and we will continue to watch him grow and if all goes well he will be my first stud dog. 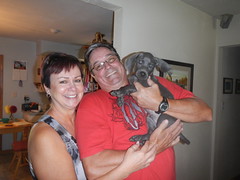 3) BlueRivers First Choice Mighty Jager “Harley” (green boy).  Harley now lives in Redding, CA with the Mays family. He will join four generations of hunters on their hunting excursions in Northern California.  Harley will be preparing for his NAVHDA Natural Ability test with the Great Central Valley Chapter in May 2013. 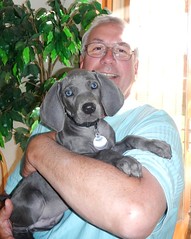 4) BlueRivers First Dude Steve “Stevie” (orange boy).  Stevie flew home with his daddy, Paul on July 23rd.  He headed north to Friday Harbor, WA which is on the island of Anacordes.  Paul is an avid hunter of 20+ years and loves to spend the fall hunting upland game in Eastern Washington.  Paul is also looking to move into field competitions in order to extend the field time.  This includes the NAVHDA Natural Ability test with the Pacific Northwest Chapter as well as AKC hunt tests and/or field trials.  He will also be participating in the IABCA conformation shows. 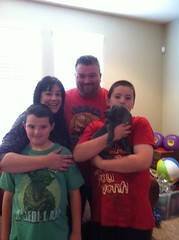 5) BlueRivers Family First “Coen” (lime boy).  Coen is now being loved by his new family, the Shanes from Hayward, CA.  Jack has been hunting for many years but Coen is his first Weimaraner.  He will be training with Brad Higgins in Marysville, CA and will look foward to his NAVHDA Natural Ability Test with the Great Central Valley chapter in May 2013.  Coen has already been working with quail in his yard and learning the excitement of it all.  Below is video: 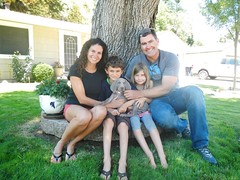 6) BlueRivers First Showgirl “Ava” (hot pink).  Last but certainly not least to go home was Ava.  Her new family, the Blake’s live in Santa Barbara, CA.  Ava’s new daddy is currently a SCUBA diver and underwater hunter and is looking to make the transition to above water hunting of upland game.  Ava also will be introduced to the wonderful world of AKC Conformation shows.  The Blakes have agreed to show Ava and (hopefully) earn her conformation championship.  Ava is being co-owned with me and may be used for future breeding. 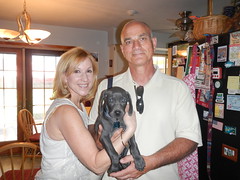 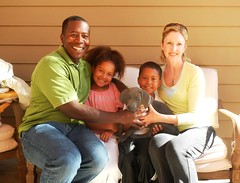 8) BlueRivers First SierraNevada Runner “Marley” (red boy).  The Goddard-Miller family is very excited for their new puppy, Marley.  Marley is their second blue weim from the Fairhaven’s line but the first in the Blue Rivers line and he has plans to be a running companion for his new parents. While not hunters, he will see his siblings at the NAVHDA Natural Ability Test with the Great Central Valley chapter in May 2013. 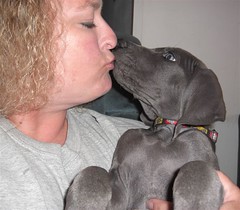 9) PM’s BlueRivers First Guinness “Guinness/Gus” (black boy).  Guinness was the stud breeders choice of the litter.  He is now living in Carter, Montana with PM Weimaraners.  He has big plans in the Big Sky State.  He will train and hunt weekly, and compete in with NAVHDA’s Montana Sharptail Chapter Natural Ability test and hopefully go on to compete in their higher level events as well.  Guiness will also compete in AKC Hunt tests.  Hopefully he will be ableto travel to do IABCA conformation shows as well.  If all goes well, he will be a future stud dog for PM Weimaraners.  Check out Guinness’s first day of field training HERE 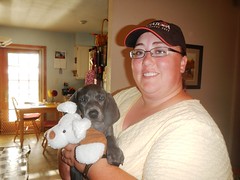 10) BlueRivers First on Point “Covey” (light pink girl).  Covey is the furthest puppy from home and now lives in Downsville, Louisiana.  Her new mommy, Cristi drove from Louisiana to Californa to get her.  On their way back she got to visit Montery, CA, Yosemite and the Grand Canyon.  Covey joins a family of another blue Weimaraner, Cooper and many other farm animals. Covey has a very exciting future of competing in rally, agaility, field events and IABCA conformation.  If all goes well, she will be the foundation bitch for Cristi’s breeding program.  Covey is co-owned with me.