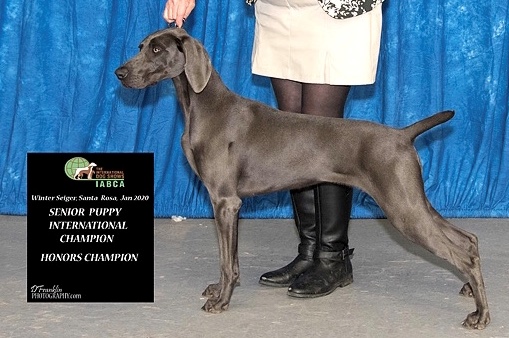 HnrSrCH PM’S Millisecond to None

Millie had her first International Conformation show last month and I am excited to say that at nine months old, she earn her National, International and Honor Senior Puppy Title!!!  I want to thank Grandma Debbie Hopkins for the excellent handling.

On Saturday, show #1 Millie earned a SG1 rating (top score for a puppy) and advanced to the Sporting Group and took third place.   In show #2 Millie earned her second SG1 rating and advanced to the Sporting Group and took a first place and advanced on to Best in Show where she had some stiff competition but did not place.  We also entered her into the “Express” show which is individual dog judging and evaluations where she earned a third SG1 rating. The three SG1 ratings for the day earned Millie her National Championship.

We went home very happy and excited for her accomplishments.  I was a bit worried because we only had a few weeks of conformation training since she was in field training most of November and those holding conformation classes take the month of December off.  Extra thanks to Debbie who met me whenever she could for short lessons while I dragged Millie and Mario to classes all over Sacramento and Vacaville.