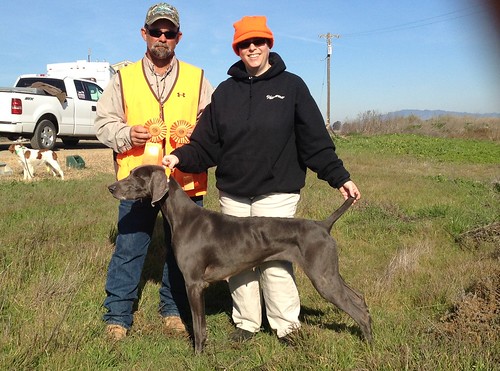 It’s been almost exactly 3 years since our last attempt at AKC’s Senior Hunter title. To read about those tests and her first SH leg, click here: Senior Hunter 2010

Roxie had been regressing in her training a bit as was evident while hunting last fall.  She needed more training and practice that I had opportunity to give.  I would have liked to go back to our usual trainer but in order to finish her testing, she needed more specialized training. So I opted for a trainer that was experienced in these tests and who could work with her on what she was lacking.  So, I dropped her off on December 30th for six weeks of training.  I’ve missed her so much!!! 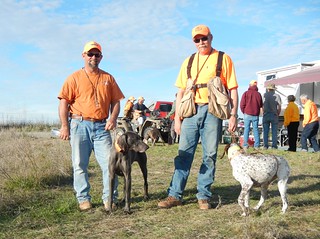 So, it started last weekend (Feb 2 & 3rd) at the SFBWC hunt test at Quail Point Hunt Club.  She had earned one leg pf Senior Hunter back in 2010 and needed three more to earn her title. 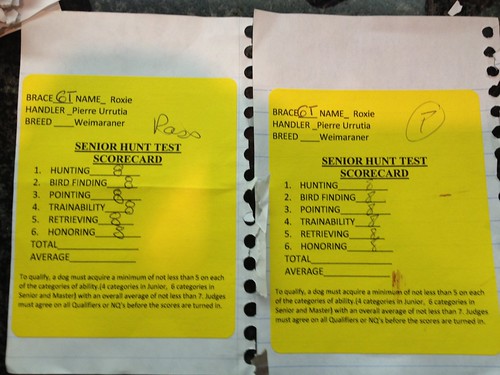 Sunday, 2/3/13 – Sunday didn’t go so well.  Roxie found her bird, and went on point. Pierre kicked around for the bird but was unable to locate it.  When he released her to relcoated, it was apparently 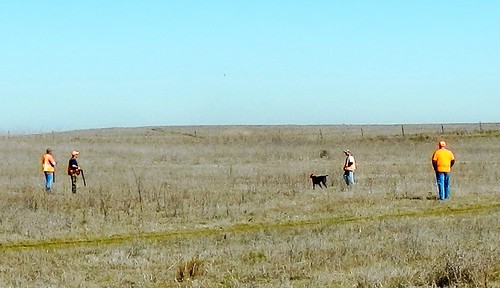 only about a foot in front of her and she stepped forward and flushed up the bird herself then took off after it.  FAIL.  At that point, she was done for the day.  What she SHOULD have done, and has done successfully in the past was to move a little closer and re-establish her point.  If she was close enough, she should have just stayed where she was.  So now, we were dependant on the two tests the following weekend in order to earn her title.  If she didn’t pass both tests the next weekend, she would have to wait until the fall to test again as we are planning for babies again.  Below are scores from Day 2: 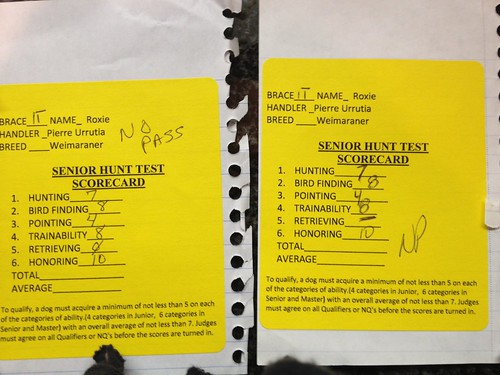 During the week, Pierre worked on her relocating and no matter where they were training, how and where he touched her to release her, she stood steady every time.  This is a problem I have repeatedly had with her in the past. She does very well in training but when it comes test time, she seems to forget what she’s supposed to do.  There are humans out there with the same problem.  You know the material, but are poor test takers.  That’s my Roxie!

Fast forward to this last weekend, Feb 9 & 10.  The Golden State English Setter Fanciers hunt test at Grizzly Island.  Due to the test location, I was able to walk to the bird field and hide behind the trucks to watch and video Roxie’s test.

Here are the scores from the weekend: 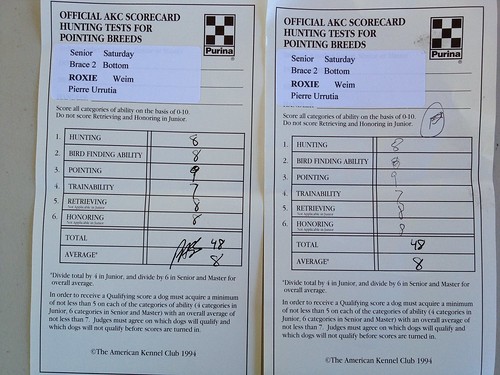 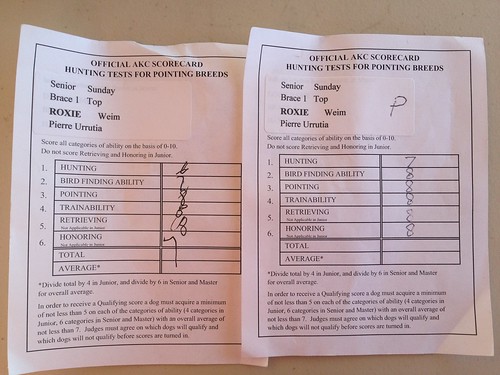 I’m so proud of my girl. I knew she could do it, she just needed a stronger handler to get her through it.  So what’s next?  Couch time, running partner and hunting partner.  Oh and mommy one last time.

Special thanks to Pierre Urrutia of Diamond P Gundogs for helping her over the last three hurdles of earning her SH title.

Also, I want to be sure to recognize that Roxie had a strong foundation of training by Brad Higgins of Higgins Gundogs.