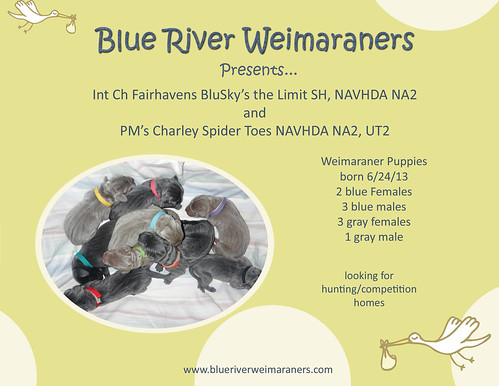 After what seemed like the longest wait EVER the puppies FINALLY arrived on Monday, June 24th (and some on Tuesday as well).  They were well past their due date and caused a lot of people (well, mostly me) a lot of anxiety.  My helpers, Sarah and Rachel, were here with me from Thursday through Saturday waiting with me for the arrival.  Roxie’s temp, which was supposed to drop as the initial sign of oncoming labor, dropped, then went back up repeatedly starting Friday morning.  I thought for sure it was time so I stayed home from work. It was not to be. The temp fluctuation continued through the weekend causing me a lot of grief.  I was hoping they would be here on Friday so I would have a couple of days with them before having to return to work.  Again, it was not to be.

Monday morning was different, her temp was down and she was breathing heavy.  This is GOT TO BE the day.  I went to work while Sarah & Rachel stayed with her.  Later in the day I got word that she was starting to shiver.  While I was waiting for the panting, I had forgotten about the shivering.  Stage 1 was officially here.  I told the girls that if she started to make noises, to call me.  She never did.  When I arrived home, Roxie greeted me at the door and I was happy to see her too.  Shortly after arriving home, she started panting.  My next step was to close off the doggy door so she could not go outside on her own.  She spend the next couple of hours ringing the bell to go outside every 10 minutes.  As it started getting dark, she was not allowed outside alone and had to go out on leash along with a flashlight and towel… just in case.  At this point it was about 8:30 and there was panting, some shivering but no groaning indicating contractions.  I reluctantly took her out again at 8:45 (every 10 minutes was getting a bit annoying).  She pottied and continued to squat.  After 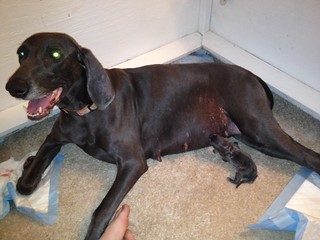 about the 3-4 time, she groaned really loud and at that point I know it was time.  I reeled her in and rushed her in the house and told the girls IT’S TIME!  15 minutes later, the first puppy was born.  BLUE FEMALE!  This was really great news because a) last year the ONLY blue female we got was last in line.  It was nice that she was first in line this time and; b) there are several homes looking for blue females.

Over the next six hours, seven more puppies arrived.  I knew there were definitely eight puppies and possibly a ninth so we gave some more calcium (helps the uterus contract) and hoped for another one.  3 hours later, we finally gave up and 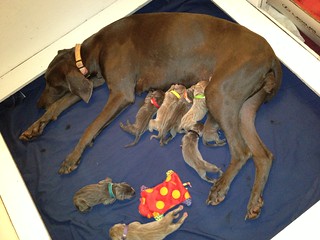 presumed we were finished.  At this point it was about 5:30 am and we went and cleaned up and rest.  As were relaxing on the couch and a little dozing here and there, I heard Roxie licking herself.  I went up to check on her and she was licking herself, but nothing was really going on.  I went back to the couch and dozed some more.  A few minutes later I realized she was STILL licking so I got up to look and saw that there was another puppy!  Roxie had quietly delivered and cleaned puppy #9.  We swooped it away, finished cleaning him and clearing his airways.  He was healthy and happy to be out.  It was a long night we were very tired and needed sleep.  The girls left around 7:30 and headed home to bed.  I stayed up for a few more hours until the next sitter, Kathy arrived for the afternoon shift.  I introduced her to the kids and promptly went to bed.

Wednesday morning, the Sarah & Rachel came back to help take the puppies to the vet to have their 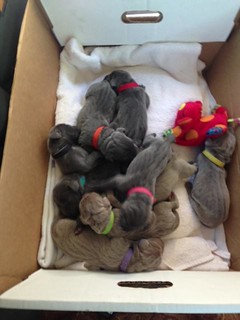 tails and dew claws done.  They did really well and were asleep in their box within a minute of the procedure.

Since then, the puppies have had lots of love and snuggles from their four sitters and me.  There are already a couple noisy ones who like to make lots of noise all the time like when they eat, sleep and wake up.  In my experience, these puppies will continue to be the most vocal of the bunch.

Tonight (Thursday) I started the Bio-Sensor program and they all did well.  There were a couple that protested being upside down but for the most part, they settled easily whether they were being held upright or upside down.  However ALL of them did not like the cold wet towel.  While handling them for bio-sensor, I weighed them and trimmed their nails.  They all rested easily on their backs in my lap and allowed me to trim their nails.  Some fell asleep in the basket on the scale.  All with their little tongue’s sticking out.  So cute!!! 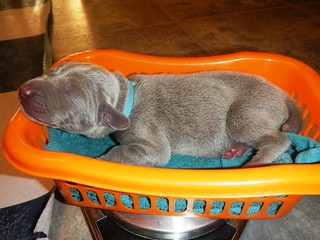 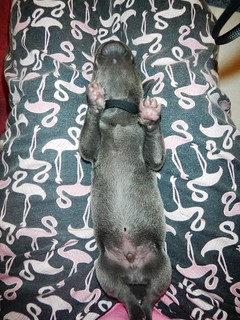 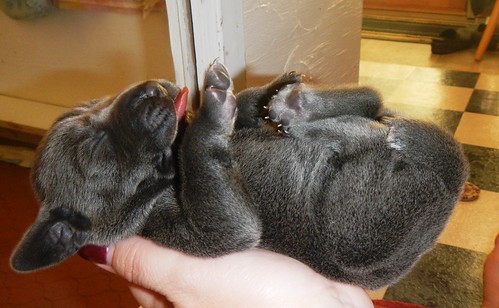 I’m looking forward to the weekend and being able to catch up on my snuggle time and paperwork.  If you’ve contacted me in the last week or so and I have not responded, I hope to get to everyone this weekend.

Photos are being uploaded daily.  You can find them in the Gallery.  I hope to get some video of them this weekend..

Have a great Friday and upcoming weekend!