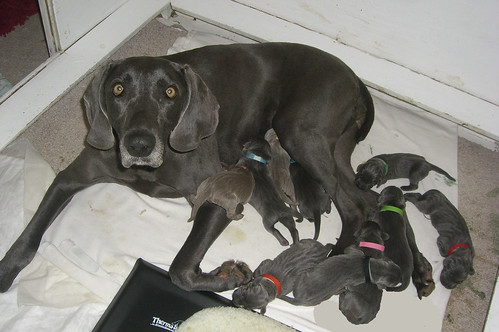 Final Count:
2 gray females
7 blue males
1 blue female
Total: 10 (not including the one who didn’t make it)

Yesterday was a VERY long day.  It all started at 4:30 am on Wednesday, April 25th.  Roxie had finally started signs of stage 1 labor with panting, restlessness, and shivering.  I called Liz at 4:40 to 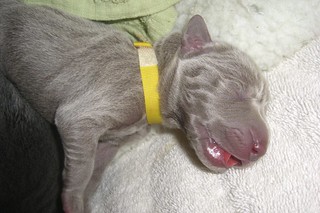 let her know.  Since I didn’t have Roxie during her last week of pregnancy last time around, this part was all new to me.  I didnt’ know how long it could take so I called Liz ASAP.  She got up and headed to Sacramento from Lakeport (about 2.5 hrs).  She arrived and for the next 17 hours, Roxie stayed in early labor.  I was afraid to leave the house even with someone there but we were hungry so I ran out to get some dinner.  As soon as I got back, not 10 minutes later, Roxie wanted to go outside (again).  I took her outside and she did her business then squatted with a major contraction and moaned.  This was it.  It was finally time… 17 hours after I had gotten up with her.  At 7:50 pm, our first puppy had finally arrived.  A little gray female.  I chose 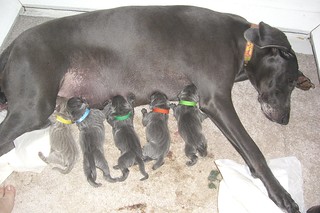 yellow for her collar color.  For the next three hours FOUR blue males were delivered.  I knew that I had several people on the list hoping for blue females including a co-ownership breeding home in Louisiana so we were thinking that the next round of puppies would have some blue females.

The next round took from 10:02pm to 1:17 am to start.  I guess when there’s 11-12 puppies in there, it takes a while for the ones in the back of the line to move forward.  Meanwhile, Liz too the chance to catch some zzz’s while I stood watch.  When the first puppy of round two finally arrived, she was a gray female.  We were thinking hmmm… we have a pattern here.  Next came ANOTHER blue male.  ANOTHER ONE?  Where are all the girls?  Next up, was another gray female, but something was wrong.  Her eyes were open and her tongue was white.  She was not breathing.  We tried to recisitate her, but she was already gone.  We weighed her and she was only 11 oz which is MUCH smaller than the others where were about 1lb or more.  After speaking with the vet, she said that since she came out not in her sack, that more than likely she had died a while ago and that she was probably mal-formed.  Losing a puppy is a very difficult thing to do regardless of whether it was stillborn or it dies later on.  While she isn’t officially in my count. I’m naming her “BlueRivers First Angel”.  She will be burried in the backyard next to Winston which interestingly enough, Roxie had already dug a hole next to him a couple days ago.  Maybe she knew?

The second round of puppies took twice as long as the first round and went from 1:17 am to 7:40 am and in that round were THREE more blue males, Angel and last but certainly not least was finally a little blue female at 7:40 am.  Which wasn’t little at all! She was the biggest of all the puppies weiging in at 18 1/4 oz!  But she had some issues.  She wasn’t breathing when she came out and Liz worked desperately to get her to breath.  She was born outside her sack (along with several others) and had apparenlty taken in some amniotic fluids.  When she finally started breathing she was gasping for air. 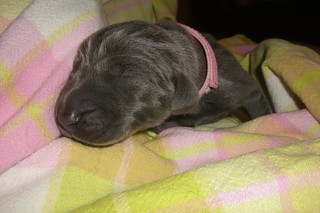 After several attempts to clear the airway, we called the vet who had is give her a good pinch to make her squeek.  That wasn’t working.  I remembered reading in Weimaraner Ways that poking their bum with a thermometer would also help.  So I did.  I poked her a few times and finally we got a squeek.  Squeeky puppies means live puppies!  Making them squeek helps them fill their airways.  While holding her upside down, we were finally able to get the fluid out of her lungs and she was breathing and squeeking rather loudly.  She was going to be OK!  So while we were excited to hear her squeek… she continues to be quite noisy.  She has a way of letting you know when she’s not happy. She whines the loudest of all the puppies and most often.  She sounds like a peacock when she whines.  Between her and light blue collar boy, they are going to keep me awake A LOT!

Once the last puppy arrived, I took Roxie out to potty and feel her up to see if there were any left inside.  I didn’t feel anything so I felt pretty confident that we were finished.  We cleaned up the area and let Roxie have all her babies then Liz was kind enough to take puppy watch while I showered and got some rest.  After about 5 hours sleep, I got up and relieved Liz of her duties so she could head home and get some much needed sleep of her own.

Well, that’s all for now.  After I eat something and get some more sleep, I’ll start figuring out what’s on the plate for their first week.  I’ll be posting pics often so be sure to check back for new additions.  You can find the puppy photo gallery HERE.  I’ll try to have newest photos on the first page so you don’t have to go looking for them.

G’night Everyone!!
Renee, Roxie and the “First” Litter

* Special thanks for Liz Fairlee of Fairhaven Weimaraners for helping me whelp this litter. Not sure I could have done it without you!*
Like this post? Share it